RACHEL JOHNSON: Don't moan about benefit cuts... do something to help 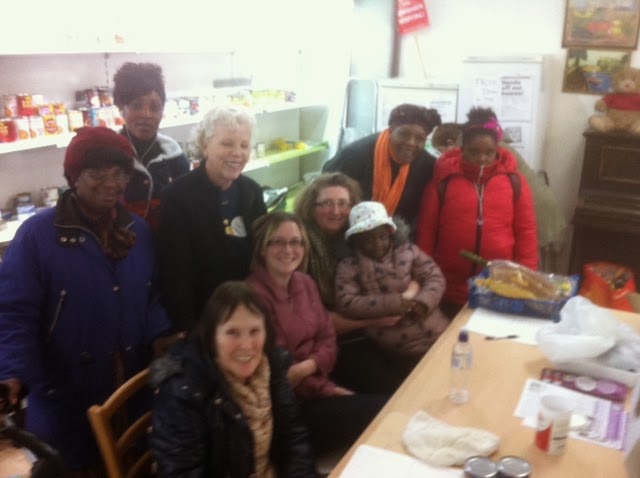 Jess in centre of the team at We Care food bank Lewisham, who is about to open a We Care food bank in Suffolk.
Jess urgently needs use of a hall, empty shop office etc to use as distribution and drop of point for food, and our clients.
You can contact the Suffolk We Care direct to offer help, access food, or to help with donations, collections etc. at first the food bank will be fortnightly and we will grow and change to reflect what the community needs, be it ad on an advice service, legal support. home visit, or running a charity shop to raise the funds to buy the food for people and pets in food crises. At We Care you must have prove of address and picture ID, only 1 person per household can be a member, but you do not need a voucher . we do ask that people if they have it pay a £1 so they are contributing to the project and as we are run by the communty for the community we have no state or business funding, so need every £1 we can raise, as food donations never cover the amount we need to feed the huge numbers of people in food poverty.

Interview with We Care Founder Ray Woolford in last Sundays Mail on Sunday.

When we think of hunger, we somehow think of Michael Buerk.
Distended bellies, stick legs, and flies crawling into the gummy eyes of starving children. And Africa.
We don’t think of lumpy people in cheap parkas, queueing at food banks, or spooning in the Heinz Cream of Tomato at soup kitchens.
But this is where we are. Picking up food: Ray Woolford is an estate agent who also runs a food bank in Deptford, South-East London

Ray Woolford is an estate agent with a moustache who also runs a food bank in Deptford, South-East London.
Four times a week, Ray does the run to Waitrose in Greenwich to pick up food going past its sell-by date, but he says that shoppers are so skint that they lift stuff from his trolley before he can get it to the food bank.
There it goes fast, with only one protein – a tin of tuna, a jar of mini-frankfurters – per week, per family, and only to those with vouchers. Association: When we think of hunger, we somehow think of Michael Buerk (pictured), who is best known for his reporting of the Ethiopian famine in 1984

Last week, a long-awaited Defra report into the 170 per cent increase in the use of such banks contradicted a minister’s previous claim that the spike was down to ‘increased supply’.
Like the experts hired by Defra, Ray attributes the rise in food banks not to supply, but to need, due to three factors: stagnant wages, a 30 per cent rise in food prices, and the new punitive sanctions regime that’s led to 818,000 claimants having their benefits docked since October.
Or, to sum up, the fact that millions of people are broke.
‘I’ve nothing against carrot and stick, but once you’re sanctioned, you’re off benefits and you get nothing for 13 weeks,’ he says. ‘No voucher, no help with the Oyster card, nothing.
Atos [the IT company that assesses whether benefits claimants are fit to work] is paid not to pay people their benefits. There’s no hardship fund, nothing.’
And now our bishops are agitating, too. ‘Britain is the world’s seventh largest economy and yet people are going hungry,’ they wrote last week, as they slammed Cam for the growing crisis of food poverty here on God’s green English earth.
They decried the fact that  half a million have resorted to food banks, that 5,500 have been admitted to hospital either with or for malnutrition, and blamed the Tories’ moral mission to reform welfare, a system that ‘should provide a robust last line of defence against hunger’.
Yes, grim. But I dispute the Right Reverends’ claim that it’s only the Government’s responsibility to make sure nobody in Britain is ever hungry.
At the moment – and Chancellor George Osborne points out that the recovery is shaky as he continues with his £12billion cuts in welfare this year – it’s all about what the Government CAN do. Criticism: Bishops have slammed David Cameron (right) for the growing crisis of food poverty in the world, while George Osborne (left) has pointed out that the recovery is shaky as he continues with welfare cuts


It’s not about what it would like to do if, to deploy a popular phrase, money was no object.
To say the Government should be a bulwark against hunger sounds good. But it’s like saying it should stop the floods.
‘I’d close my food bank tomorrow if they made sure people could get food,’ says Woolford.

Mmm. The ‘they’ word. I agree ‘they’ – ie our masters – could do more: the Government could soften its punitive new sanctioning regime; it could force supermarkets to give away, not throw away, food; it could stop prosecuting ‘skippers’ (those who scavenge from bins); it should consider issuing food stamps so the cash-poor have some means to buy food, rather than spend the little they have in hand on debts, bills, heating, cigarettes, Sky TV, drugs, whatever.
The bishops have asked us to fast at Lent to raise awareness of food poverty and – you are hereby warned – I’ve done  some telly for Sports Relief, also to raise awareness of food poverty. At the end of filming,  I came away very aware of  food poverty.
I also came away knowing that while there are limits to what the state can achieve, there are  no limits to what we can do, individually.
Some of our finest institutions have nothing to do with the state, and are all the better for it. The National Trust. The Women’s Institute. The Royal Academy. The Ramblers’ Association. The Scouts.
As the axe falls, what we used to call ‘Big Society’, ie ‘people’ has quietly occupied the no man’s land between public and private sector. We have time-lapsed back to the Victorian age, before Socialism with its capital S, to a time distinguished by public service, charity, and voluntary provision – to selflessness with no thought of reward.
Then there were mutual and friendly societies, voluntarily-run hospitals.
Today we have soup kitchens, feeding centres and up to 500 food banks run in association with activists at community centres and churches.
At one, Trinity Methodist Church in Clacton-on-Sea in Essex, I sat with the homeless and hungry at a properly laid table. Volunteers in aprons served us, then cleared our plates. Nobody was paid. It didn’t feel like a hand-out.
As we all inhaled second helpings of delicious veggie shepherd’s pie made and dished up by Diane Kilgour from FoodCycle, it was hard to work out who was giving and who was receiving.
There are 60,000 social enterprises in this country, for which hundreds of thousands of people work. But don’t sit back. They are all small, and underfunded.
As the bishops say, ‘this is a national crisis, and one we must rise to’. I agree. Our country does need you. For many, there’s not a lot of the state  left, but oodles of potential  do-gooders out there. So come on. It’s down to us, not ‘them’.

Posted by Ray Barron Woolford at 03:07