Kath Duncan, more great reviews of her biography The Last Queen Of Scotland

REVIEW: Kath Duncan: The Last Queen of Scotland
by Ray Woolford
Many Women have been written out of the male-dominated history books. For every Amazonian queen, rebel girl, scandalous mistress, militant suffragette or persistent female pioneer that we now know about, there are hundreds more “hidden her stories” of extraordinary women which go totally uncelebrated.
Ray Woolford’s fascinating new book shines the spotlight on an unsung political heroine whom many will be unfamiliar with.  Kath Duncan was one of the most important activists of the last century. She had connections with major politicians like Winston Churchill & George Lansbury, she stood for parliament, made inspiring speeches and dedicated her entire life to the causes she believed in, to the detriment of her own health. However, her leading role in left-wing and communist politics, her working class Scottish background and her gender, have all led to her story being marginalized. Her important contribution to the civil rights movement has been buried by the establishment since her death in 1954, at the height of the cold war.
Woolford’s book tells how Kath Duncan was a highly significant champion of the poor and the unemployed. She was a tireless campaigner for workers’ rights and spent 2 jail terms in Holloway prison for making political speeches. The National Council for Civil Liberties supported her in a landmark court case on the freedom of speech but not many history books will tell you that fact. Duncan also opposed fascism, took part in the Battle of Cable Street and was central to the Aid to Spain movement in the 1930’s. She was a key player in these things – so by rights she should be a household name or have a memorial or statue erected somewhere.
Woolford’s very well researched biography defiantly places Kath Duncan’s story right back into the public eye where it belongs, and restores her to her rightful position as one of the leading civil-rights activists of our time. Her political campaigning can be linked to several of the most significant moments in 20th century British history and has relevance to many of the social and political issues we have today.
In a year when we are celebrating 100 years of some women getting the vote in the UK – it is vital that we also recognise and acknowledge the life and work of Kath Duncan - a working class woman who played just as significant a role in politics as The Pankhurst’s, Nancy Astor or Barbara Castle. In a world where we constantly strive for more equality this book has an important message about how society deals with freedom of speech and civil liberty. Kath Duncan’s story has finally been uncovered by Woolford and all of us really ought to read it.
Chrissy Hamlin (www.chrissyhamlin.blogspot.co.uk) The Hidden Herstories Blog and #WomensHistoryHour on twitter

Review; From Steve Topple , activist , broadcaster, political commentator  and writer for The Canary

"The Last Queen of Scotland is a veritable banquet of forgotten history mixed with Woolford's own love story for one of the greatest women most people have never heard of. Immediately accessible, the author has crafted an important and pertinent public record of a figure who encapsulates so many of today's struggles. The banishing of the mists of time from Kath Duncan's life could well stand as one of Woolford's finest achievements. 4.5/5"

I must be honest, I had heard very little about Kath until Ray introduced me to her, and I’m so thankful that he did. He takes you on the journey of Kath’s life, starting from her childhood and later her friendships with several people including Churchill.
Ray describes everything with such clarity and precision which made me feel like I know Kath and that I can certainly relate to her.
I was shocked to have fond that the little that I had previously read about Kath was inaccurate and Ray has gone to great lengths to correct this, and quite rightly so.
Kath was a truly amazing woman, fierce but kind, fair and understanding. She is an inspiration to all women worldwide.
I give this book a 5-star rating because it doesn’t get better than this and I fully recommend this book to people of all ages.
Thank you, Ray.

There is no doubt that the most important period for ordinary people in Scotland & England was between the Wars especially after the Russian revolution the first world war & the start of the second & whilst today many commentators talk about the similarities from the 1930s to the present age of Trump & rise of fascism again across Europe 1930s is an error we should all be reading up on.
This extraordinary extensively researched book puts at its core the true story of Kath Duncan who was very different from the other Scot from Kirkcaldy that is still celebrated across the globe today the economist Adam Smith & yet Kath Duncan was probably the most important Scottish & UK civil rights activist the past 100 years whose imprisonment laid the ground work for The National Council of Civil  Liberties that we call these days Liberty , which is also the title of another must read book about Kath Duncan Who  until this book you probably knew nothing about .
Kath Duncan Leader ,Suffragette , LGBT , civil rights campaigner ,leader Hunger Marches ,anti-war , anti-fascist , activist Spanish civil war ,support   for Gandhi & Indian workers for union recognition, as well as taking on the utility companies ,the King ,Parliament & the entire legal system .
Kath Duncan ,may have been so small she needed a soap box to become her stage , but her glamour,courage & inspiration for many in 30s Britain lead many to call her the peoples Queen .
In the year we celebrate 100 years of Women’s activism is it not time we bring Kath Duncan out of the shadows & let her shine with the stars .
This book screams period drama .Make me a movie , but most of all raises i crucial question we should all be asking especially those in education & in the position to make statues & put up plaques .
Why do we celebrate Kings, Queens. Tyrants & the children of the elite who became activist ,but selectively erase working class heroes especially women like Kath Duncan whose activist won us all the freedoms we all enjoy today ? .
You don’t have to love history or politics to enjoy this book The Last Queen of Scotland takes you on a ride through the world in 1930s through the life of Kath & puts the case why she is the most important Scot & UK civil rights activist past 100 years from Kirkcaldy to Hackney to Deptford & back.
i rate this book 5 stars   , everyone should read this book and insure she becomes the household name she deserves to be !
Who will be first to erect a Statue to remember & give thanks to such a great  activist of inspiration ,Courage , Kirkcaldy .Scotland .London ,Hackney ,Camden or Deptford Lewisham ? 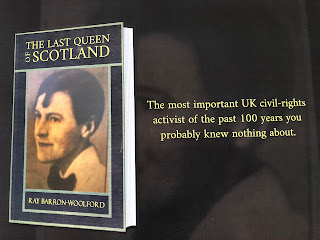 Posted by Ray Barron Woolford at 03:13