The Battle 2 save #carnegieoccupation library


As the library was about to be closed at the end of March and users were going to throw a leaving party, it turned into an occupation.
These days it seems the media only pays attention to celebrity and drama and that did it.  Instant coverage, on the Vanessa Feltz Breakfast progamme, on LBC, local TV and later, more on LBC, Radio 5 Live and Channel 4 News.
The user occupants included children, parents, library campaigners, local residents.  They had loos, cloakrooms, a supply of food and wine, much support from outside and articulate public library aficionados.  And it is a beautiful building, perched on a rise overlooking the residential area -  the community it served.
Sadly this came to an end when the interim possession order was served on Friday.  Occupiers had 24 hours to comply.
By Saturday morning (9th April) at 11.30 am there were at least 1000 massed outside with banners, whistles, horns, car horns and will power. As ever, Alan Gibbons, writer and committed library supporter, was alongside.  Whatever anyone's politics we were united in our support for public service.  After the speeches, cheering and hugs for Laura (Chair of FOLL and the Library Campaign) we set off, carefully monitored by a non-intrusive police presence.
We drifted down to Loughborough Junction, and while going under bridges the sound echoed loudly to the library support chants and choruses.  We cheerfully stood and chatted while waiting for the off at traffic lights and junctions.  We turned into Minet Road and soon came face to face with Minet Library, which also houses the Local Archives.  We trekked on down quiet, picturesque back streets and finally turned into Brixton Road, on our way to Lambeth Town Hall, Tate Library  and Saturday shoppers, many of whom took photos on their phones, which we all hoped would be appearing on social media.
Windrush Square awaited our presence.  What would that first wave of immigrants from the West Indies be thinking of what they viewed as starting a better life?  Sir Henry Tate's bust stonily viewed a scene that he could never have imagined happening - the salami slicing to death of the public library service, one of the essences of a civilised society.  But, he listened attentively to the speeches and resounding cheers.
Even the weather was kind to us, a bright, calm, fresh Spring day.

And what now?  Well, the weekend was awash with discussions on morality, tax havens, tax efficiency, tax avoidance and tax evasion, demonstrations at Downing Street and the Connaught Rooms, steel plant closures, the Referendum, the London Mayoral and GLA elections, and even the Archbishop of Canterbury.
Did anyone mention libraries?  Resounding Silence!  Sadly the libraries minister at the DCMS (Ed Vaizey MP, popularly know as The Evasive Vaizey) is not even available to discuss library issues with Laura and her assistant, always too busy!  Hiding?
No official will defend the 1964 Public Libraries and Museums Act so we are now assuming it is policy to downgrade and diminish the library service and profession, into nothing.
Cui bono?
Image from Lewisham Library campaign organised by www.peoplebeforeprofit.org.uk sad that these are Labour Councils evicting local residents defending Libraries, clearly Corbyn is only in charge in his front room, but Labour Councils these days no different than Tory. 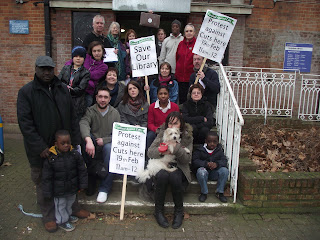 Posted by Ray Barron Woolford at 00:50