I have today raised a fresh question for Lewisham Labour council as the Millwall foot ball land grab deal continues to raise national interest and concern since the people behind the land deal include  former leading Labour party Councillor and senior Council staff and with the offshore link it is increasingly looking like a deal that is in all but name a can of worms. Lewisham People Before Profit had some years ago at the start of the plans launched a broads community campaign and collected thousands of signatures in protest at Lewisham Council support for these plans as reality comes ever closer more people are asking questions and i intend to cover this in depth on my * Talk radio Europe show *  in February  . This is my latest Question to full council .

* In light of a Labour Councillor stating her concern that the Millwall planning applications have a *Stink* about them. and widespread community concern. what is Lewisham doing to insure that these planning proposals by former senior Labour party and Council employees are open and above board?
And would it not be better for public confidence for an independent body to review these plans?* 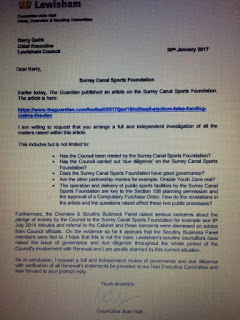 Posted by Ray Barron Woolford at 01:11