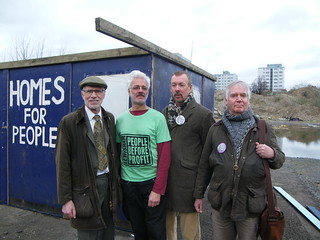 Some of the leaders of Lewisham People Before Profit – including from left – George Hallam, John Hamilton & Ray Woolford – with their eco-home behind them
Lewisham People Before Profit, a political party and campaigning group in South East London, took action two weeks ago to highlight the shortage of affordable housing in the borough.
The Besson Street site in New Cross has lain derelict since 400 council homes were bulldozed over six years ago, despite having planning permission for 170 homes. Whilst Lewisham Council talks big about building six new council homes many sites like this are left vacant. There are 8,000 on the council waiting list and thousands more refused a place on the list. This is why People Before Profit took action.

The cosy wooden cabin was built over two weeks by members of People Before Profit and many other volunteers who gave their time and skills to bring this community project to life. It had just been finished on Friday, with low-voltage solar lighting, rainwater harvesting for the kitchen sink, an efficient wood-burning stove and a compost toilet. This weekend was intended to be the opening, with the chance to get involved in urban gardening on the site, and an open discussion on the housing issues which affect Lewisham residents and led us to build what we called the/ Hasty House/.
Instead, People Before Profit activists arrived on Saturday morning to find the project in ruins, having been demolished by a firm employed by the council, probably paid more than the £400 the house had cost to build. Although the project had been openly publicised with clear contact details, no attempt at discussion was made by the council. In acts of unnecessary vandalism the water tank and stove were wrecked and tools worth £500 stolen.
LPBP’s house-building project has, from the outset, been about highlighting the dearth of social housing in the borough and encouraging real/ /low-cost, eco-friendly, quick-build/ /development of the site for this purpose. It was made clear in a letter to all local residents that the /Hasty House/ would be dismantled in time to allow construction of homes for Lewisham people to start right away.
We see the council’s failure to even discuss the project with us as symptomatic of this Labour council’s refusal to meaningfully address the housing crisis and the effect it has on Lewisham residents.
While the council can use its might to stifle protest, it cannot sweep its persistent failure to redress inequality in housing provision and it remains to be seen whether Besson Street, and Lewisham, will get the houses they truly need. People Before Profit’s bold occupation of Council homes in February 2012 to prevent their sale led to victory and co-operation with Lewisham Council but in this election year the Mayor may feel he needs to stamp on activism which shows his own housing record in a poor light.