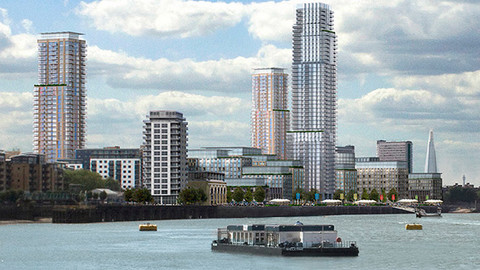 The Convoys Wharf proposal. Pic: Hutchinson Whampoa
Lewisham People Before Profit will be calling for changes in the Convoys Wharf regeneration plan during London Mayor Boris Johnson’s representation hearing at the end of the month.
The hearing is scheduled for March 31 and is likely to be the decisive hearing on the future of the former Deptford Dockyard.
Activists from Lewisham PBP are opposing the Mayor’s regeneration plan, as they want to “ensure Convoys Wharf is a development that reflects our area’s heritage, creates homes and jobs for local people and a green enterprise zone.”
Lewisham PBP will be lobbying along with Greater London Authority members, South London’s People Assembly, London Radical Housing Network, Lambeth United housing co-op and others.
The final decision on the regeneration plan, valued at more than £1bn, was taken over by the Mayor from Lewisham council in September last year. Initial plans to redevelop the area, which is the largest single development site in Lewisham, were put forward by Hutchinson Whampoa, a Hong Kong-based investment company.
In January Lewisham council made an appeal to Johnson not to approve the development unless major changes are made. The developer wants to build 3,500 homes on the 16.6ha riverside site in Deptford, including 3 towers rising to 40 storeys.
People Before Profit are calling on all Londoners to join them in “defending our heritage, demanding local jobs and truly affordable homes that local residents on the average wage of £28,000 per year can afford.”
The hearing will take place on Monday March 31 at 4pm in the Chamber at City Hall after which the Mayor will determine whether or not planning permission should be granted.

Posted by Ray Barron Woolford at 06:38