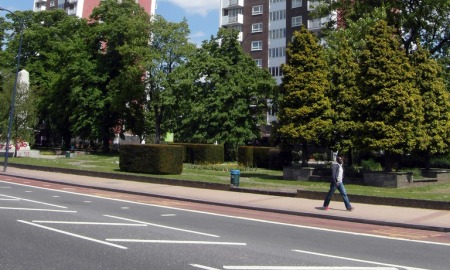 Lewisham High Street Pic: Reading Tom
Vulnerable Lewisham residents who suffer from heart and lung conditions could face an increased respiratory risk this summer, after it is revealed the borough is the second worst for tree felling in the capital.
Data released through the Freedom of Information Act showed that Lewisham Council planted 139 street trees but felled 398, resulting in a loss of 259 trees from 2010 to 2013
Lewisham came second to Kingston on Thames, who topped the list of London boroughs who are cutting down more street trees than they are planting, after 348 trees were felled in the South West region.
The Green Party released this information in light of recent research into the impact of Urban Island Heat Effect on public health conducted by Imperial College London.
It has been found that in built up areas temperatures can be as much as 11 degrees warmer during a heat wave than in rural areas, due to roads and buildings absorbing and trapping heat.
Scientists from Imperial have revealed because of this, the chances of Londoners dying from respiratory failure is increased by 10 per cent every degree that the temperature rises during a heatwave.
Jenny Jones, London Assembly Green Party Member, said: “We should be preserving and building up our street tree stocks to help cool and combat the health impacts of heat waves. A number of boroughs are going backwards, chopping down more trees than they are planting.”
“The Mayor of London has a strategic aim of increasing tree canopy cover by 5 per cent by 2025, the equivalent of 2 million extra trees.  However it is not clear how this will be achieved, or how this is targeted towards the most built up locations where heat island effect is most pronounced.”
In the east end however there has been an increase in greenery, with 456 trees planted in Hackney and 570 in Tower Hamlets.
Lewisham Council declined to comment when approached.
By Emily Shackleton