How the welfare reforms affect you: Lewisham 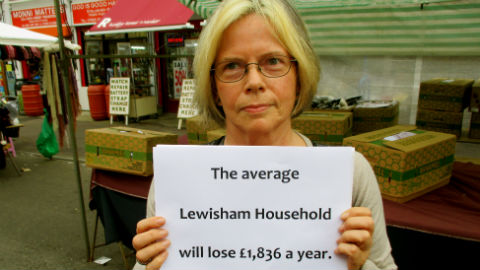 Lewisham. Pic Source: Maya Oppenheim.
The South East London borough is set to be one of the hardest hit of London’s boroughs as a result of the welfare reforms. With over 10,000 Housing Allowance claimants the average loss of £1,992 per year is set to have large social repercussions and the one one percent uprating will see all of Lewisham’s 44,000 claimants lose on average £351.
Population: 266,500
Children: 53,900
Ethnic makeup: 66% white, 24% black, 4% mixed race, 4% Asian, 2% chinese and other.
Child Poverty: 55%
Households that claim benefits: 44,511 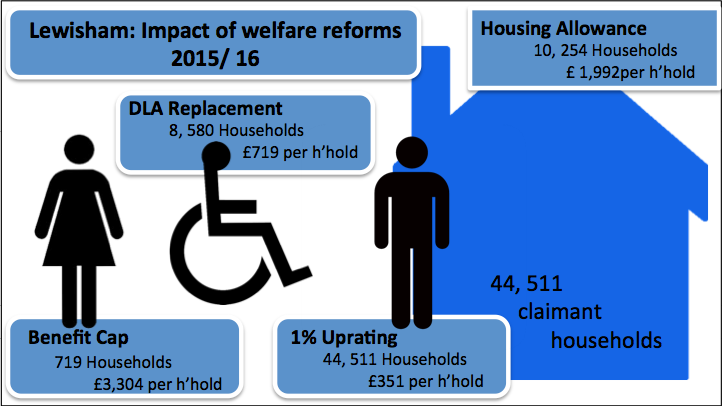 How Lewisham’s welfare losses compare to the rest of England (out of 325 English local authorities)
….16th when it comes to average loss per claimant household
….31st when it comes to average loss to “bedroom taxed” households
….15th when it comes to average loss to local housing allowance households
… Lewisham claimant households will lose the 21st highest amount as a result of the 1% uprating
…and how much is the the average household set to gain from the Universal Credit scheme
£ 192
Go here and click on impact modelling tool for a full rundown of how Welfare Reforms will affect Lewisham
(Source: Local Government Association and Centre for Economic and Social Inclusion http://www.local.gov.uk/publications/-/journal_content/56/10180/4098780/PUBLICATION)
To Read ELL’s other stories from Welfare Reform Week click below:
Welfare Reform Week: ELL begins week investigating the impacts of the reforms in our boroughs one year on
Bedroom taxed households pass the 10,000 mark
The rise of the Foodbank: 6,500 EastLondonLines residents forced to visit foodbanks in last eight months
Sanctions on the increase: Number of claimants losing JSA benefit reaches record levels across ELL boroughs
Never been more important that local people Vote Lewisham People Before profit in Mays local elections.
Follow Ray on twitter@Raywoolford

Posted by Ray Barron Woolford at 07:20