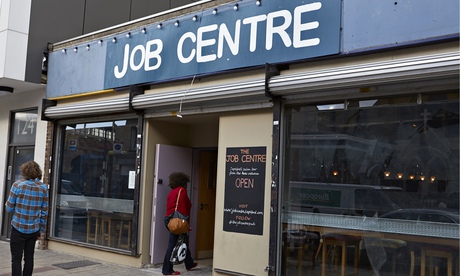 The Job Centre bar in Deptford, London, has angered residents for using the building's background for publicity. Many want its name changed. Photograph: Andy Hall
A former job centre in south London that has been converted into an upmarket bar of the same name is facing a backlash after local residents and online campaigners condemned it as insulting and in poor taste.
The Job Centre bar in Deptford, which promises upmarket pub food in an atmosphere of "quirky design features inspired by its function as a place that once served the unemployed", found itself at the centre of a social media storm as people accused the owners of flaunting "ironic gentrification" in an area that remains one of the poorer parts of the capital. The closure of the Deptford job centre in November 2010 had been contentious, with local councillors and residents fighting a campaign to keep it open to help tackle high levels of deprivation and unemployment.
Richard Simcox, of the Public and Commercial Services Union, who was involved in the fight against the job centre closure, said the decision to use the building's background for publicity was "horrendous".
He said: "We were very involved in the campaign to prevent the closure of the job centre because it is an area of high unemployment. We campaigned hard at the time to keep it open, it was a very well-supported campaign from a wide-cross section of people in the local area. Unfortunately we lost as it was one of the first to job centres to fall victim to the government's new measures.
"Now we see it has been turned into a hipster bar called the Job Centre, using the fact it used to be a job centre as part of its promotion. It is just grossly insulting that they are inviting people to go and enjoy themselves with an ironic nod and wink that this was once a place for poor people."
He added: "The poorer people who used to use this as a place to find work are now being priced out of areas like Deptford, so to make a feature of the kind of public service that the job centre used to provide is outrageous and in very poor taste."
An open letter from local resident Jane Elliott, on behalf of campaign group Lewisham People Before Profit, took a similar line, calling on the bar to change its name on the basis that "the current name sends an extremely insulting and profoundly negative message about the role of your establishment in the neighbourhood and your view of the majority of the people who live there."
It continued: "The bar's name and its interior design suggest that you want potential clientele to understand that your bar is for the new people moving into Deptford, for whom job centres are a joke, and not the existing residents of Deptford, for whom job centres are often a necessity … we encourage you to rethink this unnecessarily divisive and repulsive message."
Walking past the bar as it opened Stephen Williams, 31, said: "I'm on jobseeker's allowance and I find it offensive. People think it's an actual job centre – it's a very insensitive name. They should change their name."
Carol Brown, 50, who lives nearby, agreed: "It is insensitive, it is not right at all. I've seen lots of people do a double take when they saw it today. In this area, there are lots of people who still need a job and so this bar should have a different name."
Susan Ball, 57, added: "When I first saw it I was very unhappy because I thought that after all that money and effort they spent closing down the actual job centre, they'd just brought it back. But when I realised it was a pub, my main disappointment is that they've chosen a name that isolates it from the local community and that's a real shame."
Others on Twitter took to condemning the establishment as "callous" and "disgraceful", while Fiona Maree tweeted at the owners: "Bloody hell @antic_london – I take it none of you have ever had to use a job centre? It's not fun I assure you."
However, the Job Centre bar defended their position and took to social media to address the complaints, tweeting: "Apologies for the offence caused, I can assure you that wasn't our intention. We are not laughing at the unemployed nor an elitist place … I intend to run a good decent pub".
Max Alderman, director of Antic Collective, which runs over 34 bars and pubs across London including the Job Centre, also defended the name.
He said: "We've got a number of pubs and generally we take over pubs with an established name. We name them after what was in or around them and this pub used to be a job centre. Pubs are also where people sometimes find work and we employ over 700 people and encourage people in the local area to seek employment here. We are not trying to belittle or annoy anybody."
Dave Plummer, a spokesman for the Lewisham Green party, said the pub served only to highlight the growing inequality in the area.
He said: "While we can see the humour in the Job Centre pub it is in very poor taste. Lewisham is one of London's most deprived boroughs, with an estimated 5% of employees here not even paid the minimum wage, yet we are seeing developments being built for professionals while rents rocket and social housing stagnates."


As of Monday 14 July 27 Local Deptford Community groups and organisations have sent us support.
We plan to publish list of 50 Deptford groups and organisations supporting our call for a name change in August, by which time more groups and residents would have had time to meet, discuss and have consent to join the present 27 groups who do support our call for a name change.
Clearly the only way we can get the pubs owner to rethink, is by keeping away   loss of income can hopefully lead to a positive outcome and we have a pub that gives a positive impression of Deptford reflecting the areas Heritage and Cultural diversity as well as the buildings awesome history.
Thanks to the increasing number of people contacting us who say they have been but will not be going again until the name is changed.
Other names based on past building history include The Local Press.The Mercury.The South LondonPress. The Arts collective. Utopia who occupied the building as a community arts space after the Job centre was closed  insuring it was turned into an awesome community space. not left empty as the pub owners claim.
It seems only way the pub will agree to change name , is if more people keep away.
This is not the first time this company has had to change its name after upsetting local people.. And you may ask when they bought the Conservative Offices in Brixton and Catford they decided not to call either.. Conservative Bars..
Join www.peoplebeforeprofit.org.uk
Follow Ray on twitter@Raywoolford