The injury caused by austerity is all too real, so why turn this pain into whimsical scenery for people lucky enough not to depend on an actual jobcentre? 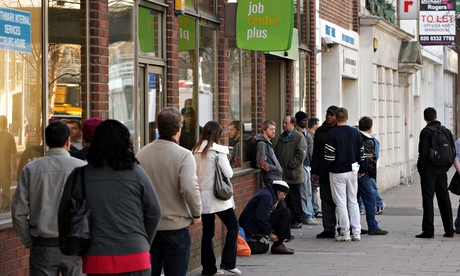 'The gulf between the jobcentre as a service and the Job Centre as a bar isn’t an ironic smirk at gentrification but its most blatant manifestation.' Photograph: Oli Scarff/Getty Images
In Deptford High Street, the former site of the local jobcentre recently became home to a new bar called The Job Centre. The bar's website promises upmarket pub food in an atmosphere of "quirky design features inspired by its function as a place that once served the unemployed". In a neighbourhood with so many impoverished residents that there is a free food bank around the corner, unemployment is now being packaged as fun decor for those with disposable cash.
The bar marks the leading edge of gentrification in Deptford, which is located in one of the most deprived wards in Lewisham, south-east London. Key poverty indicators in Lewisham remain high, with youth unemployment consistently in the top 10% of boroughs nationwide. Expensive new housing brings in well-heeled buyers who send rents skyrocketing. Older residents see the more affordable stores on which they depend displaced by pricier establishments aimed at their new neighbours. With its repurposed name and unemployment-themed decor, the Job Centre Bar sends a clear message that it is for the people moving into Deptford, for whom jobcentres are an amusing backdrop, and not for the existing residents of Deptford, for whom jobcentres are often a necessity.
Local residents battled to stop the actual Deptford jobcentre from closing. The planned closure was due to the jobcentre's lease ending, and the campaign to keep it open (captured at its height in this brief film) involved local users, councillors and MPs. Eventually a deal with the landlord was announced in January 2010, but the lease extension was not signed before the coalition took office. The new government chose not to sign and the closure took place in November 2010. As Tony Reay of the PCS union puts it, "This was a particularly bitter pill to swallow". The Deptford jobcentre thus became one of the very first casualties of the coalition's austerity programme.
In a context in which the injury caused by austerity is so pronounced, why would anyone add the insult of turning these injuries into whimsical scenery for people lucky enough not to depend on an actual jobcentre? The story is hard to understand given that the Job Centre Bar's owners,Antic Collective, have been known in south London for involvement with progressive initiatives such as the Save Lewisham Hospital campaign. Local residents were similarly flabbergasted by a bar in Hackney that was for a time named after the Asian Women's Advisory Service that formerly occupied the building. The name was changed after outraged outpourings from members of the public, but some commentators felt that the owners were really only guilty of "bad taste".
It's true, of course, that such businesses can't be blamed for the perfect storm of gentrification and austerity currently dismantling low-income neighbourhoods. But that doesn't mean that their "bad taste" is just window dressing either. This brand of ironic recycling has become the signature style of gentrification in London and far beyond – so second-nature that the offence it might give has become literally invisible to those responsible.
To do something ironically means doing something with a wink and a nod that says you aren't "really" doing it. Much hipster style involves adapting formerly déclassé activities or objects in this way. When it comes to gentrification, though, this inverted-commas aesthetic has a special resonance. Many of those moving into neighbourhoods such as Deptford – myself included – would prefer not to see themselves as part of the wave of displacement and feel some allegiance to the kind of progressive politics that protects and supports low-income inhabitants. Ironic style distances the process of gentrification by putting it in inverted commas. It says, yes, we're displacing you, but we're not "really" displacing you. Meanwhile, for those outside the orbit of this style, the gulf between the jobcentre as a service and the Job Centre as a bar isn't an ironic smirk at gentrification but its most blatant manifestation.
Over the past week 27 Political, Community Church and Unions groups have called for a name change.
This is not the first time this pub landliord has been forced to change a pub name after upsetting locals. It seems the buildings great History as the Local Press. The Mercury.Arts Collective and more resently UTOPIA who insured the building was not empty as claimed, but was a wonderful arts community space..
All names that could be used to give a positive profile of Deptford, even if you care little about the upset caused, do you not agree that this name does not give a positive profile of the area so many of us call home, and should it not be just that when you upset people even less than 50% you change the name to reflect the concerns? Most Community people are staying away until the pub changes its name to one that reflects the areas awesome Heritage and cultural diversity .
Posted by Ray Barron Woolford at 04:00