The latest planning proposals were made public last night at a meeting called by Lewisham Council between the developers and the residents of Evelyn ward.
Convoy Wharf is of far greater interest to all the residents of Deptford not just this ward, and the lack of promotion of this event and awareness was truly shocking, Pepys Community forum  were present, as was Positive youth, but no other group was represented and People Before Profit were only present due to a call tipping us of about the meeting.
After the huge campaign by residents,  which lead to the original plans being scrapped, it seems the Labour Party is seeking as it has been doing with the hospital campaign  to high jack the issues to stop the huge numbers of people switching on mass from Labour to People Before Profit.
At last nights meeting the local Labour councillor was a bit put out, when people she wished to have pictures taken with her stated they were People before Profit supporters.
The Plans;
Far greater thought has been made into the overall impact on the area, whilst original plans were for several tower blocks, some at 48 storeys high, the fresh plans only have one tower block at 46 storeys, with other blocks with stage floors to maximise the river views.
They have not ruled out the Deptford Is.... plans to rebuilt the LENNOX, they have changed the focus with the Olympia building being the key focus of the site, they see this as a key community space, whilst a small primary school is part of this plan and loads of shops and bars with more focus again on linking the river frontage to the wider area, reflecting across the site as much as possible the areas marine and garden history  ( John Evelyn and Sayers Court Manor would be key to the areas development plan history whilst doing much more to open the pathway to Deptford Station to boost the high street).
The Site would also see roads on a parr with road layouts in Rotherhithe facing the river with 2 major access points from Grove street and King stairs., The Local Gardens Twinkle and Pepys would in these plans become part of the development, clearly another area of concern.

Issues.
We raised and response;
Dragoon Road was Originaly agreed as access point for the construction lorries as well as the river, the new plan would see the commercial traffic pass Deptford School, this could lead to massive congestion and health Concerns for local Children, They say they will take another look at this.
The Tower Block at 46 storey , in our view is still much to high.
Affordable Housing, The developer states they plan to offer 15% affordable, whilst our figures on close inspection show only 8%. Lewisham Council  policy for all affordable developments of this size , is 35%
The Reality; We have a new Rent cap coming in in April, also Council have been told that all new Tenants must pay 80% of Market rents, When you consider a 1 bedroom apartment on this development will cost £1300 per month plus bills, and the Cap restricting how much a family can get in help via Housing Benefit, clearly Lewisham/Deptford residents will not be in a position to buy or rent with average borough wide wages of just £24.500 per year.
People Before Profit have there fore been pushing forward the Following;
Jobs, we should be building these flats wil local residents many of which have the skills, as well as traing the huge numbers of young people we have as plumber, Builders, Managers, Electricians etc so that they will have long term jobs and real career opertunities at the end, Lewisham seems to be on side with this, and the Labour Councillor supported our view that we must train people in advance, my proposal to use Olympia building as training site whilst site is built has not been ruled out.
Business Plans; Clearly we no not need more Tesco Metro, we proposed again that the area is used to create a new Hub business centre, be it the UK centre for Green Energy Business, Social enterprise or just the centre for UK art, looking long term and building on the mass creativity that exits in Lewisham we should be using this as a way to offer a radicle different business centre whilst turning our area into a better greener space to call home.
Green Energy; In response to our constant demands that this site should lead with Design and Green energy, we were told plans are in place to link with the SELCHIP site at New Cross to use the waste for power on site. Again we stated that we should be using the site to develop low cost energy for all SE8 residents, tackerling fuel poverty would help to address the terrible impact this site will have during the 13 years plus it will take to build the site.
With only 2 Hour Meeting clearly we could not address every concern, People Before Profit will continue top push forward to support not just our proposals, but also Deptford is, and the building of the Lennox.
I hope this has given you a bit more insight into what is Going on.

Keep up to date on this fast moving story; follow Ray on twitter@Raywoolford 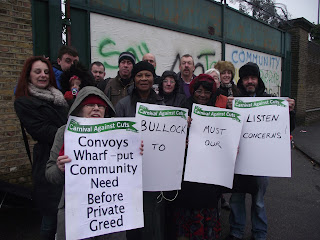 Posted by Ray Barron Woolford at 02:51

More Thoughts on this on My other posting highlighting the Public meeting dates in feb and March with more detail of our concerns, Other Groups will have other points they will raise about own ideas and plans for the site, as well as concerns about scale and mass, whilst People Before profit supports all Groups working for the wider community, We have our own clear agenda and proposals and do not wish to offend or be seen to hijack other groups proposals.