#bookofthemonth The Wolfiian publication new writers and new thoughts . politics. poetry and war. A must read

The Wolfian issue 10 is a Special Edition, dealing in part with the 2017 General Election in the United Kingdom, whilst highlighting inequalities, insecurities and brutalities of the system. It also features articles on world affairs, championing peace and human rights, plus a lively Poets Quarter and short fiction that sets the world in context. 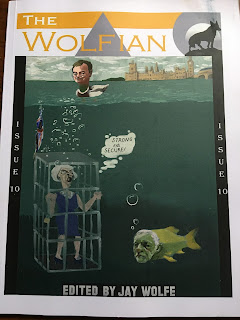 The cover of issue 10 features a fantastic artwork by Isaac Okin, designed especially for the June 8th 2017 General Election.
This election is the most important in a generation, and The Wolfian believes that nobody can stand idly by, without doing their utmost to work for change.
Liberalism and Social Democracy underpin a swathe of political parties in the United Kingdom, and although individual articles will have their own opinions, The Wolfian simply urges you to vote. Many hundreds of thousands of people have registered since the election was called, but that will be for nought if they do not vote on June 8th.
We also intend this magazine to stand the test of time. Human Rights, Civil Liberties and democratic values are long-term. We are proud once again to host an article by @CiLuna27 on the injustices faced by even some of the mildest critics of the autocratic regimes in the Middle East.
The production of this magazine was over-shadowed, as indeed were our whole lives as a nation, by the tragic events in Manchester. Beautiful lives were taken away for nothing, except an irrational hate, cut short, and their families and friends left devastated. The fantastic tribute paid the next day in the city is what sums up this country - we all feel anger, we all feel fury, but it is love, hope and remembrance that won the day.
Finally, it falls to me once again to thank our fantastic contributors, and the team of friends and supporters who endeavour us to get this magazine out. Regular readers will recognise Violett with her take on grassroots politics, Jerry Vilhotti with his masterful flash fiction that can tell a story in so few words, and Julie Maxon, writing here most powerfully upon Yemen.
We would like to thank Will Black and Ray Woolford for allowing The Wolfian to syndicate their articles, and Francis Sealey for letting us post his heartfelt thoughts on Manchester as our lead article.
It simply remains for us to thank you, the reader, and to hope you enjoy this special edition of The Wolfian.