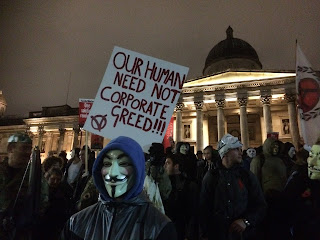 Well i was starting to think 2018 could not be any worse than 2017, but then i remembered, we should start seeing the staggering numbers of people evicted this year due to #universalcredit which should be welcome, the idea that we get one simple payment, not unlike a basic income that many of us have argued in the age of robots, is the way forward and yet this is a tory gov driving this agenda, so is clearly designed to punish instead of support , the cost to house ever more people in hostels etc beggars belief and today we have #carillion going bust , the cause as usual GREED and PRIVATISATION , Greed because the people who have trashed the company, the pensions of the workers and entire local communities economic survival will still get staggering sums of money in THEIR protected pensions and THEIR huge pay offs . I have consistently argued since the abuse of power with Maxwell at The Mirror years ago private business should NEVER be allowed to have anything to do with workers pensions. it is NOT their cash to play with.
It seems strange that we have laws to insure tenants rental deposits are held in separate SAFE business accounts and yet peoples life savings invested in their pensions is about as secure as your chance of winning the Lottery.. Why is no campaign and NO political party demanding change on this alone? Why are WE expected to bail out a private company with OUR cash? . This is a company that treats its staff badly, should never have been awarded so many contracts and has a ton of PFI contracts that bleed our NHS and Schools dry. Let it go bust. NO pay of to its bosses and bring back the labour force to build the Council homes we need and lets have Governors and Local Councils back running OUR schools for community good NOT private greed.
Posted by Ray Barron Woolford at 05:44