The Browning Society will be giving a talk by Dr Simon Avery as part of The 3 International Deptford Heritage Festival on ; Robert Browning and Elizabeth Barrett Browning , their opposition to the slave trade  , with thoughts and readings by leading poets of their work  including Scot Lewis, Sue Brown,And Jayne Thomas with more names to be confirmed on  their period as local New Cross Deptford Residents.

2pm Saturday 2 February 2019 with tickets just £5 the perfect gift for poets and lovers of literature  or if you have bought tickets for the play #Liberty admission is included with this ticket.

January 10th, 1845
New Cross, Hatcham, Deptford
I love your verses with all my heart, dear Miss Barrett,--and this is no off-hand complimentary letter that I shall write,--whatever else, no prompt matter-of-course recognition of your genius and there a graceful and natural end of the thing: since the day last week when I first read your poems, I quite laugh to remember how I have been turning again in my mind what I should be able to tell you of their effect upon me--for in the first flush of delight I thought I would this once get out of my habit of purely passive enjoyment, when I do really enjoy, and thoroughly justify my admiration--perhaps even, as a loyal fellow-craftsman should, try and find fault and do you some little good to be proud of herafter!--but nothing comes of it all--so into me has it gone, and part of me has it become, this great living poetry of yours, not a flower of which but took root and grew... oh, how different that is from lying to be dried and pressed flat and prized highly and put in a book with a proper account at bottom, and shut up and put away... and the book called a 'Flora', besides! After all, I need not give up the thought of doing that, too, in time; because even now, talking with whoever is worthy, I can give reason for my faith in one and another excellence, the fresh strange music, the affluent language, the exquisite pathos and true new brave thought--but in this addressing myself to you, your own self, and for the first time, my feeling rises altogether. I do, as I say, love these Books with all my heart-- and I love you too: do you know I was once seeing you? Mr. Kenyon said to me one morning "would you like to see Miss Barrett?"--then he went to announce me,--then he returned... you were too unwell -- and now it is years ago--and I feel as at some untoward passage in my travels--as if I had been close, so close, to some world's wonder in chapel on crypt,... only a screen to push and I might have entered -- but there was some slight... so it now seems... slight and just-sufficient bar to admission and the half-opened door shut, and I went home my thousands of miles, and the sight was never to be!
Well, these Poems were to be--and this true thankful joy and pride with which I feel myself. Yours ever faithfully Robert Browning

Robert Browning (7 May 1812 – 12 December 1889) was an English poet and playwright whose mastery of the dramatic monologue made him one of the foremost Victorian poets. His poems are known for their irony, characterization, dark humour, social commentary, historical settings, and challenging vocabulary and syntax.
Browning's early career began promisingly, but collapsed. The long poems Pauline and Paracelsus received some acclaim, but in 1840 the difficult Sordello, which was seen as wilfully obscure, brought his poetry into disrepute. His reputation took more than a decade to recover, during which time he moved away from the Shelleyan forms of his early period and developed a more personal style.
In 1846 Browning married the older poet Elizabeth Barrett, and went to live in Italy. By the time of her death in 1861, he had published the crucial collection Men and Women. The collection Dramatis Personae and the book-length epic poem The Ring and the Book followed, and made him a leading British poet. He continued to write prolifically, but his reputation today rests largely on the poetry he wrote in this middle period.
When Browning died in 1889, he was regarded as a sage and philosopher-poet who through his writing had made contributions to Victorian social and political discourse. Unusually for a poet, societies for the study of his work were founded while he was still alive. Such Browning Societies remained common in Britain and the United States until the early 20th century.Tickets for festival ;https://www.ticketsource.co.uk/deptford-heritage-festival .https://www.ticketsource.co.uk/deptford-heritage-festival 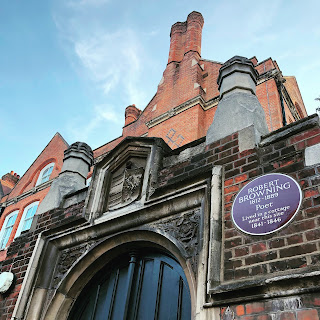 Posted by Ray Barron Woolford at 05:12