Liberty and how Kath Duncan, and her activism in 1930s Britain won us the freedoms we ALL enjoy today 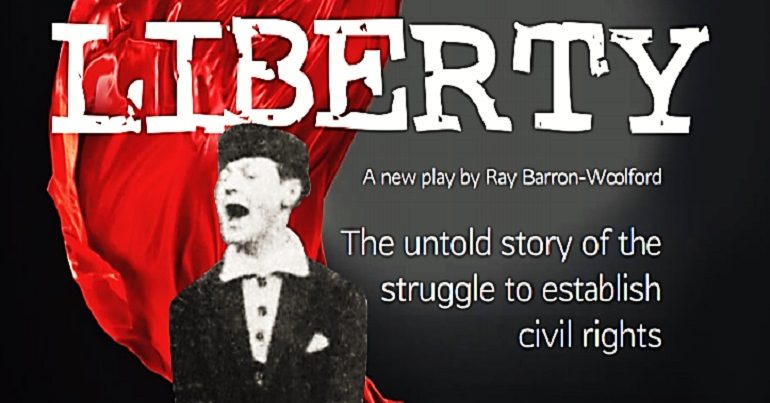 Fly away and discover Europe's most beautiful destinations, for the best prices ever. Book now - from £* 24,99.
​Find out more

A new play is bringing to life the forgotten story of a radical woman who shaped many of the civil liberties we now take for granted. And between the contemporary accounts, historical references, and a bit of creative licence, Liberty has some important messages that resonate today.

Kath Duncan was a Scottish-born political activist during the early part of the 20th century. Living and teaching in south London, she was imprisoned for six months in 1932 on a charge of being a “disturber of the Peace of our Lord, the King”. Her crime? Singing the Labour Party anthem The Red Flag and speaking at a demonstration.
Duncan’s second arrest and subsequent trial in 1936 paved the way for not only the human rights organisation we now know as Liberty, but it also put into motion the laws over freedom of speech that we have today.
Little was previously known about her life, until author, campaigner, and broadcaster Ray Woolford stumbled upon her story. He has now turned it into a one-act play called Liberty. The Canary caught up with him to discuss Duncan, protest, and the implications for politics today.

As Woolford recounts, Duncan had an illustrious history when it came to activism and politics. He told The Canary it was a challenge to “do a play about the most important civil rights activist of the past 100 years”. This is because Woolford thinks:

No other activist has been at such a high level on so many campaigns. She was active in the suffragettes at the start but felt the women running this could do well and manage without her. So, she became a Communist Party parliamentary candidate for Greenwich. She also led the opposition to fascism, being at Cable Street, and was a key member of the selection process of people going to fight for the republic in the Spanish Civil War.
Duncan also led hunger marches and welfare reform protests. And interestingly, she also stopped the council’s plans to scrap Deptford market when Deptford was being gentrified in the 1930s.
As well as opposing slum landlords, she also ran groups to stop evictions and put pressure on the council to start a fund to support the poor. She also led 100,000 people marching on Newman town hall against austerity measures. Duncan even forced the gas board to scrap its plans to impose a poor man’s tax on fuel, after she marched 30,000 people down the Old Kent Road refusing to move away from its site until policy was scrapped.

Woolford’s investigations into Duncan came about by chance, when he was researching the history of Deptford for a festival he was helping to organise. Having subsequently found out Duncan had lived on the same street as him, Woolford said he was “hooked”. He went on to spend over three years going through the National Archives researching and discovering huge amounts about Duncan.
The idea of a one-act play came about by chance though:

I had planned to write just a biography, but whilst I was visiting her place of birth in Scotland I kept meeting loads of people and historians that kept saying this would make an amazing play. After all, we learn much about our kings and queens, but nothing about our working class heroes. And this is especially so of working class women. Unless they are a female activist born into aristocracy, they are all but erased from history.

Liberty charts a brief period of Duncan’s life in 1930s Deptford, London. Opening with Duncan “on her soap box” after going out to support striking dockworkers in Woolwich, it quickly turns dark. Police brutally break up the protest, and subsequent events lead to Duncan being on trial for the first time – eventually being imprisoned.
The structure of Liberty is unconventional. Woolford opens with a newspaper clipping of Duncan’s first trial in 1932, and then moves on to give a potted history of her life in the third person. He also gives a history of Deptford, including the Peasant’s Revolt of 1381. Woolford said that charting some of Deptford’s history was important to him because:

Deptford has played a hugely important part in people’s uprisings over the years. There have probably been more well known activists, past and present, that have come from Lewisham than any other area of the UK. Not that you would be aware of this, going by the council’s shameful failure at a most basic level to put up as much as a plaque of remembrance.

After the potted histories comes the actual play. It charts the dramatic events leading up to and during Duncan’s first imprisonment, including actual Hansard records of the debate in parliament about her at the time. Again, Woolford intersperses this with contemporaneous newspaper cuttings, adding to the stark reality of events. But one fact about Duncan he omitted was an extraordinary relationship she had:

In 1917, in Dundee, she developed a lifelong friendship with Sir Winston Churchill. It was a friendship that insured both British and Russian secret services would seek to recruit her as a spy! She declined both.

But it’s her activism and resolve that Woolford finds so endearing. At 5′ 2″ she was so tiny she needed a box to speak from. It had the word ‘stage’ written on it. So every time she spoke, she would stand on her box and perform – all learned from her love of dramatics. Moreover, Woolford believes that her story resonates deeply with the current political climate we live in:

Today LGBT people around the world are still killed for being who they are. More fascists have been elected to political office than in the 1930s. Slum landlords and homelessness is no different today than the 1930s. Welfare reform via Universal Credit is the terror of our age. And, like the 1930s, women today pay the hardest price for austerity. And yet it is women who stand up against the system. But, like throughout history, they get little coverage or thanks for what they do.
Liberty highlights how tough it was for people in 1930s. And yet so many campaigns fought in 1930s are still being fought in Tory Britain in 2018. Clearly the Tories seem to be basing their present policy agenda on the 1930s.

Woolford hopes Liberty “opens a wider debate about who and what our state education system warrants as worthy to teach”:

Is it so wrong to want working class heroes and activism to be part of the national curriculum?

Liberty is a cleverly crafted ballad to a working class, no holds barred woman. Woolford expertly mingles historical fact with his own fiction, giving the reader – and he hopes eventually an audience – a potted but fulsome insight into not only the political and social upheaval that was happening in 1930s Britain, but into a woman that history has all but forgotten.
And as for Duncan? Woolford seems smitten. He concludes that:

Having been an activist my entire life, with Duncan her activism felt like my own. She was fun, glamorous, and passionate. And by going to jail lived her politics to the full. If Duncan were alive today, I hope we would be great friends. There would not be a march or a protest that I would not complete without her!

Judging by his account of her life, Duncan would probably feel the same about Woolford.
Get Involved!
– Buy Liberty and follow Woolford on Twitter.
Featured image via Ray Woolford

I am so pleased people are supporting the call for Kath Duncan in the year we celebrate 100 years of #Women #Activism to be recognised as the National #WorkingClass #Hero she was. i just hope YOU come see this extraordinary production with the most diverse and talented cast to be found on any stage..hear her story, get a ticket .https://www.ticketsource.co.uk/deptford-heritage-festival

Posted by Ray Barron Woolford at 00:17