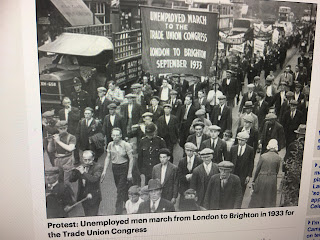 129 articles
Press Release Monday 7 October 2019 From Kath Duncan Equality & Civil Rights Network
The Governments own figures confirm that today in 2019 a staggering 14 Million people in Britain are living in poverty 1.5 Million the government rates as destitute , the numbers of people dyeing homeless in the nations doorways & street corners not seen since the 1930s an International disgrace , so the true figure is probably much higher , the cost to ALL tax payers by failing to address this rising inequality & poverty say the highly respected Joseph Rountree Foundation in the number one book on this , Food Bank Britain is £69.2 Million a year as a total public service cost , money as a nation we can no longer ignore and a demographic of people voiceless and feeling abandoned and yet as the late great Nelsen Mandela said " Poverty is man made and can be unmade " so true & the bases of this new Nation Wide Campaign of action, Protests , Rallies & Marches across the Uk in 2020 .
2020 will be the year we remember the birth of the Uk Communist party that from 1920 - 1933 was at the forefront of standing up against poor housing, inequality , low pay, welfare reform and poverty in all its forms so although we are NOT party political in any shape or form , We intend to recreate the Hunger Marches and put right a terrible injustice in which the TUC in 1933 turned away the Hunger Marches for no real reason than they were lead by the Communist Party a decision that has allowed poverty 7 inequality to continue unchallenged since & campaign for ALL political parties to appoint a Minister-Shadow 4 Poverty to oversea every Gov and party policy and how each can address this rising inequality as a priority .
Our campaign seeks the support of every political party in the country as we say enough is enough and on the spirit of 1933 March again across our green and pleasant land demanding that every political party appoints a minister 4 poverty to oversea how every policy each party has will impact on addressing and Making Poverty History .
We are Today announcing our plans to re-establish the 1933 Hunger Marches , rallies and protests across the UK in 2020 .
The Hunger Marches will start with Scottish Grassroots organisations marching on Kirkcaldy in Scotland the home of the Uk most Important Civil Rights leader & one of the leaders of the Hunger Marches of the past 100 years Kath Duncan ( a new biography that covers the history of Hunger Marches and more of the life of this inspiring working class hero The Last Queen Of Scotland is on sale now )
Kirkcaldy Scotland , will see the first March of 5 start in summer 2020 to recreate the March of 1933 on to Deptford, Lewisham in South East London to be linked up with 4 other national marches to highlight a different aspect of Poverty .
The Other 4 Marches Will be lead by grassroots , Women. LGBTQ . Homeless . Disabled groups to highlight their struggles , stories , campaigns and abuse of their civil liberties
People, Groups Organisations wanting to take part, Sponsor this Nationwide action , help in any form should email kathduncanecrn@yahoo.com Twitter account @EcrnKath text 07871187162
We Hope people will support our Kath Duncan work by making a donation one of, or monthly donation to help with costs to We Care account 65659328 Sort Code 089299
Posted by Ray Barron Woolford at 00:49