Theatre London is far too often led by big-budget productions, packed with A-list celebrity casts that leave audiences more overwhelmed by the stage sets and costumes than the content and the cast.  New independent productions giving a break to new writers and new talent throughout, however, are costly and difficult to stage with no guarantee of an audience in these tough times. This is not helped by a too-small, elite mainstream media who far too often fail to interview, feature or give space to Britain’s rising talent pool.  As Oscars and #BaftaSowhite hashtag grips social media, I do wonder if every aspect of UK theatre is really addressing this issue and truly doing its best to feature Black talent, for if it did and there were any justice and equality in news coverage, Jamar Ngozi should be up there with fellow Lewisham resident Kate Tempest, and George the Poet as one of Britain’s finest.
On a cold Monday night, I headed out with a friend to follow the buzz about this bright star, Jahmar Ngozi, to see his Edinburgh Fringe success show Broken English, holding a limited stage run at The Tristan Bates Theatre in Covent Garden. We had concerns that a Monday in January was not a great night to catch a show, but broadcaster and social commentator Robert Elms, who featured Jahmar for his award-winning BBC Radio London show, helped insure a rare almost sold- out theatre with an audience more diverse and as engaging as the performers.
Broken English, a story about one man’s life presented through the art of poetry, slamming, song, dance, music and a clear grasp of English language, ensured the audience was captivated and seduced from the very first words. Addressing the audience, Jamar asked: “Who in the audience knows what it's like to be broke?”  A play on the opening title of this production then took us all on a journey through Jamar’s life history, slavery, Windrush, war, inequality, rights, and respect for women, It explored not being great at school and yet becoming a playwright, a poet, a wordsmith and so much more using wit, dance and music. A more than able cast of Sam Burnard, the awesome Jake Bryan-Amaning and Rosie May -Jones was able equally to shine on this stripped-back set, making us rethink as an audience how we see and interpret everyday words and their power to enrage, engage, motivate and define us. Shakespeare and Wordsworth are recognized as English language at its most profound and yet I believe, in 20 years, the language of Kate Tempest, George the Poet and Jamar Ngozi will be up there, for Broken English is not just great theatre, it’s a rare piece of work that deserves a broader audience . 4 stars. Limited London stage Run so buy your tickets NOW.
Tristan Bates Theatre, at The Actors Centre Covent Garden until 22 January 2020, but look out as certain to be staged at other theatres, festivals and events 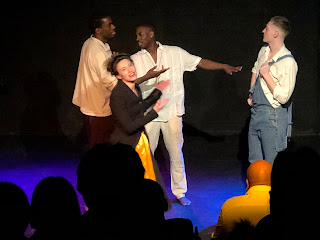 Posted by Ray Barron Woolford at 01:37