#Housing Bill 2016 What it should offer.

What should be addressed in a Housing bill ?

Ok as a life time housing activist i do support some aspects of the Governments housing bill such as tighter regulation of Landlords with a data base of ALL landlords being circulated by local Councils and Government that will not only see fines for bad landlords , rising from £5,000 to £30,000,  but also could lead to rogue landlords being struck off and banned from being Landlords.
The scale of the fines should drive up standards and with tougher rules and fines that make it worthwhile for local councils to enforce and can  only be a good thing,

i have long lobbied both The present Government,  and the Labour party  through my advisory role on the Residential landlords Association which with me on board  (before i resigned due to my political commitments..)  has done a huge amount to drive up standards bring in fair regulation and stamp out rogue landlords.. on these issues,  and  i am surprised that as with most Government policy ideas, enforcement and long term practice steps i have raised have been ignored, such as my Idea and www.peoplebeforeprofit.org.uk policy that housing benefit payments should be linked to Landlords on a national data base, this would see public funds through housing benefit only going to Licensed and regulated  landlords who not only insure property is well maintained and tenants treated fairly, but also we can insure Landlords pay tax, far to many advertise without using an agent and then keep the cash away from the tax office, even though most rogue Landlords make a living exploiting the ever increasing number of people due to low pay and ever rising rent costs  who depend on the hard working tax payer who ends up paying for this misery through Housing Benefit a staggering £29 Billion of which was paid in 2015 and is certain to rise by an average 3% in 2016 even with The bedroom tax and the cap designed to reduce this huge part of the welfare bill.

As a Council tenant for almost 40 years, i have some positive aspect on the” Right To Buy”  Entire Council estates have been transformed with Leaseholders who care about the estates in many cases poorly maintained by far to many labour Councils and who are at the backbone of local residents Associations, estate play and youth groups and who spend large sums of own money on window boxes , cleaning and paying large sums in Leaseholder charges to Councils who use this to improve and maintain Council homes and estates for all, These new estates have become real communities with huge range of different types of people leading to real diversity , community cohesion and so different from many of the sink estates around the world that end up places of misery, abuse, neglect and fear.

People Before Profit oppose the Right to Buy as many on the left do, and with 1.5 Million Council homes sold of, it is a position we should all support, Thatcher failed to replace each Council home sold with another and  the cash from the sale of this 1.5 Million homes was and has been frozen under Tory and Labour Governments and my calls and Questions as to What became of this money, and Why more Council homes have not been built constantly go ignored.

What we should have done , and should do,  with all future sales of any Social housing which have only been made possible via the tax me and you pay to the state is to build in a clause that states all COUNCIL and SOCIAL housing can only be let out via the Local Council or Housing association to  people on Low incomes and that the selling of such property can only go to people on low incomes and NOT let or SOLD for private profit, this has to major advantages, it stops Social housing from being bought by “ Buy To Let “  Landlords and insures as property can only be sold and let to low paid workers, that the rents and cost to buy will always be low insuring everyone has equal opportunity to fair rent and if they chose to buy , alongside this must be rent control  .

Since 2007 Rents increased by just 1% in  Germany , 60% in the USA , but a Staggering 346% in the UK, how can this be right or sustainable? rent controls such as have just one in to force in Berlin in 2015 in  Germany should be in the UK, Why and how has it been allowed that Landlords have seen property values rise by eye watering 500% and more over the same period and with interests rates frozen and Landlords’ given tax breaks , how has it been allowed that Landlords for example of a 1 bedroom flat in Surrey Quays  in 2007  who got £500 per month on a flat that cost £25.000 are today with the same flat worth £300.000m securing a rental of £1200? .

Another aspect to the UK housing crises has been a total failure to do more to support Self builds, Co-operative housing and to free up large3/4  bedroom homes  when families have grown and moved away to help older residents move into smaller but still home like homes, The same concern is with housing for the Disabled and again my party position is clear, that instead of forcing Developers to build a set number of “ affordable “ ( and i use this word loosely due to the total abuse of its meaning ) , Builders are forced to build  by the square foot, this would insure Councils could expect developers to create the type of homes they need within their area, such as quality housing for a Pensioner in a large 3 or 4 bedroom house that could improve quality of life for the pensioner whilst freeing up a larger home for a new family starting out, address the disability requirements of a family whilst not having to spend large sums of public money transforming a house to cope, or  spending lavish  sums of tax payers cash via housing benefit  in the private sector whilst a further aspect should be on all housing that the roofs are used for sola panels to fight climate change and address fuel poverty for all , if private home owners can get a state subsidy via the tax payer for panels on the roofs and income from the feed in tariff, why not the poor and the low paid?.

My other aspect to a Housing bill , would be to scrap the criminalisation of the homeless, are we nuts? How can it be just that we jail or evict people who occupy empty buildings, claim NO housing benefit and spend money in the local community of the building they occupy? . It must be that by law all empty buildings must be given over  to the homeless and housing charities and Colleges and Universities to offer secure low cost short term housing, instead of the obscenity of paying with tax payers cash money to security firms to keep buildings that could house People empty.

Evictions have a devastating impact on people life not just from a practical perspective, but also from a mental health perspective and i found it staggering in a freedom of Information request to Lewisham Labour Council for breakdown on rent arrears and number of people hit by the Bedroom tax,  some £12 Million pounds was owned in rent arrears whilst over 3000 People had Bedroom tax bills they could not afford to pay and had to pay as no smaller flats available to move into , the biggest cause  of evictions  is errors in housing benefit, if a Housing officer had the power to sort our and had a hot line to deal direct with Housing rent issues, these  evictions and rent debt that in 90% of cases has to be written of as evicted tenants are to poor to pay, We could end evictions and the misery it causes , whilst other impacts are that in many areas and even in the USA evictions lead to down value of homes that are in the same area as an empty abandoned and boarded up building leading to other home owners facing negative equity and debt themselves it clearly is an issue that can so easily be addressed by thought and logic , i hope my take on the Housing crises is one you share and i am proud that my political party that does have a long history in standing up and defending social housing has such clear policy agenda on it, just check out   www.peoplebeforeprofit.org.uk  you can also follow me on twitter@Raywoolford or tune into my monthly “ Talk Radio Europe “ show 12-2 UK time the first Friday in each month.  I have 2 books Published. “ Deptford “ “ Food Bank Britain” and my latest book “ Everything you need to know  about Austerity but was to brainwashed to ask “ 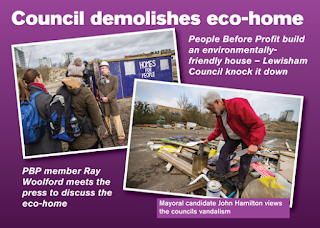 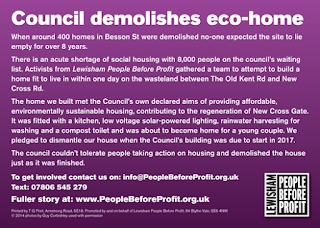 Posted by Ray Barron Woolford at 04:46