Anastasie Hotel Protaras Cyprus Boycott this Hotel and if in are go to Hotel to state your disgust.

The seven-month-old dog, named Billy, was thrown into a rubbish crusher 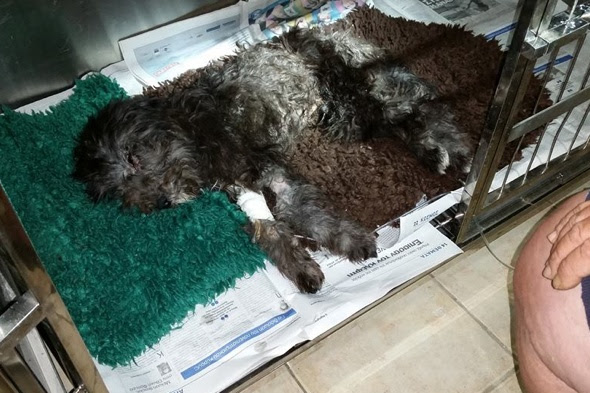 British tourists and expats in Cyprus have called for a hotel in Cyprus to be boycotted after members of its staff threw a puppy into a rubbish crusher.

A remembrance ceremony took place for Billy on Sunday at his grave in Paramytha, incyprus reports.

British tourists found the dog after the incident at the Anastasia Hotel in Protaras.

A manager and two workers at a hotel in Cyprus were suspended and the two workers were questioned by police after they reportedly callously threw the dog into the machine.

According to the Cyprus News Report, the owner of the hotel issued a statement, which read: "Tsokkos Hotels would like to clarify the following about this unfortunate and condemnable incident: The hotel management received complaints from customers about the fact that a sick stray puppy wandered around the hotel and around the pool areas.

"The hotel manager immediately after these complaints gave instructions to two hotel employees to take the puppy to a local shelter in order to obtain appropriate care. In addition, the hotel manager has informed the relevant authorities to address the issue.

"Unfortunately, the two employees did not follow the instructions of the hotel manager and proceeded to an inhuman act, unacceptable and condemnable by Tsokkos Hotels.

"As soon as Tsokkos Hotels became aware of the incident the puppy was transferred to a veterinary clinic in Paralimni to receive all necessary treatment."

Had the dog lived, the statement said the hotel would have ensured it went to a loving new home.

It continued: "We have immediately informed the police in order to provide a detailed investigation and record the incident. Tsokkos Hotels would like to confirm that based on the outcome of the police investigation, we will take all necessary actions, including legal action and stringent sanctions against all employees involved in this horrible act."
Anyone visiting this area over the summer, please drop by the Hotel to express your disgust, and blog widely to stop people supporting this Hotel. let the message out that Cruilty to animals will lead to no business.End of Off