Corona Virus Community Support Network the London Bridge Victim who lives on , leading an army of hope and goodwill

Christine Archibald was a young much loved young woman from Calgary in Canada who was on a break from her job that she loved supporting the homeless and the poor in crisis, on holiday in London with her partner when by chance she was in the wrong place at the wrong time and was one of the first tragic victims of the London Bridge terror attack, as news of this beautiful young woman tragic loss of life became global news, the Archibald family asked for no flowers, but asked everyone who cared to carry forward her work and memory by helping out at a homeless project or your local food bank and tell them all #ChrissySentYou.
We Care Food Bank was the first food bank to open in Deptford Lewisham Borough in 2014 and rapidly became the most high profile and the largest independent food bank in the Uk when it was forced to close when its rent was increased from £7,500 per year to £32,000 per year plus £18.000 business rates it diversified into advising others how to run foodbank outreach projects with guidance from the book and ebook #FoodBankBritain and started Homeless Outreach work across the Uk, The Death of Chrissy was a defining moment as the number of homeless across the Uk was seeing a massive rise and with so many new to the street, it was decided to Use Chrissy with her family and friends support to be the face of the new help and support under #SolidarityNotCharity being a food bank, people give you food, in order to register to get charity statues you must have a cash flow income, that clearly in our line of work is not forthcoming and why today we are a charity without a number , but we could establish a Christine Archibald Homeless project page on gofundme which at first we wanted to buy a fridge transport to get fresh food to all the grassroots homeless projects build on love and need to help others , but like us cash poor, when we failed to reach the cash we needed for a freezer van, we consulted and decided to supply homeless out reach projects with flasks to serve hot drinks and soup with this welcoming image of Chrissy on the flask with high visability jackets for the team leader to wear again with Chrissy smile or welcome, today across the Uk , Homeless Projects take Chrissy on to the streets , she is very much alive , her work continues , so it is no wonder that in the scary times we live, Chrissy is back again her image on posters and postcards giving, comfort, food, collecting medications for the sick, topping up key meters for the poor , being a voice to mobalise an army of community minded people that in crisis always step up to the mark , today we Advice people to contact their neighbours direct with a note so its personal and ad #ChrissySentMe , so much easier to engage with a neighbour than a stranger , as i write this Chrissy is giving Support across London and to the expats in Spain , Chrissy is mobalising a movement she could never have imagined in life , when people die, its far to easy to remember the famouse and the privilaged but for us #ChrissySentUs symbolises all those front line workers we take for granted and whom today our saving lives, Nurses, Cleaners, Doctors, Drivers. Porters. the people delivering food parcels, collecting medicine, walking dogs and topping up Key meters for people whose existence has almost always been about a struggle. Today we look after those missed by the system, the disabled, the frail, the poor and the increasing number of self-employed who can't wait until June to get a paycheck we get NO state or Council funding and yet our grassroots frontline work saves lives of those most in need, often too proud to seek help but forced to by the present reality, You can contact us via our sister charity www.kathduncanequaltyandcivilrightsnetwork.org If you can chip in the cost of a mug of Tea, please donate here;
We still need people with cars and vans to help ward by ward local to collect the food from our food supply wholesaler, anyone that needs food, we can get within 24 hours, whilst we are getting the food and toiletries and pet food at a large discount, we are still having to pay to buy it, so if you can please donate. https://www.gofundme.com/f/corona-virus-community-support-network?utm_source=customer&utm_medium=email&utm_campaign=p_cf+share-flow-1 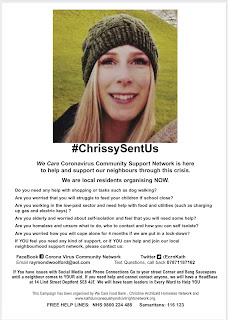 Posted by Ray Barron Woolford at 06:37