Food Banks, Vouchers and the DWP

Government insists charities form no part of welfare system and this is merely a 'signpost', but 'high level process' in place 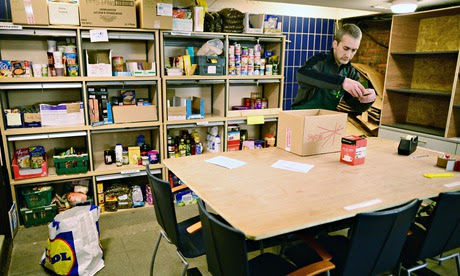 Although the DWP say it does not refer claimants to food banks, one document is called 'Food Bank Referral Service - High Level Process'. Photograph: Jeff J Mitchell/Getty Images
The Department for Work and Pensions is advising jobcentres on how to send people to food banks, official documents show – despite ministers' claiming the charitable support forms no part of the welfare system.
Ministers insist jobcentres "do not refer people to food banks or issue vouchers" and that food banks are "absolutely not a part of the welfare system because we have other means of supporting people". They say jobcentres only "signpost" the existence of food banks and dispute the link between welfare changes and a surge in their use.
However, documents obtained under freedom of information laws show there is a "high level process" written by the DWP to be followed when benefit claimants say they are in hardship because of government policy and need food.
A six-step flowchart for jobcentre staff shows that the four reasons to recommend a food bank when claimants ask for help are hardship caused by benefit changes, benefit payment delays, a benefit advance has been refused, or the advance is not enough to meet their needs.
Jobcentres that choose to offer a food bank referral "service" are told to do a health and safety assessment before sending people to a particular charity.
As part of the process, Jobcentre Plus staff fill in a slip with the claimant's details but another document orders them, in bold letters, not to describe this as a "food voucher" – apparently so as not to erode the argument that they are not part of the welfare system.
The documents show each jobcentre is told to write down how many people have been sent to food banks on a "slip record sheet", even though the DWP has said: "Food banks are not part of government policy and, as such, the Department for Work and Pensions does not hold or collect information on their usage."
The latest statistics from the Trussell Trust, which oversees a network of more than 400 food banks in the UK, show 614,000 adults and children received food parcels from its food banks in the first nine months of 2013-14, compared with 350,000 for the whole of 2012-13.
Benefit changes and delays – including instances where claimants had their benefits sanctioned, or stopped for breaches of conditionality – accounted for 49% of referrals to trust food banks to the end of December. In 2012-13 these categories accounted for 43% of referrals.
Although the DWP says it does not refer people to food banks, one of the documents obtained by the Guardian is entitled Foodbank Referral Service – High Level Process. The DWP said the guidance had mistakenly been issued by staff dealing with the freedom of information request. It said all guidance to Jobcentre Plus had now been modified to change the word "referral" to "signposting" – even though the process for directing those in need of aid to food banks appears to be exactly the same.
DWP officials say people are "signposted" to food banks only if other options are exhausted, as local authorities now have responsibility for emergency food aid. However, the official DWP food bank guidance for jobcentres makes no reference to alternative help from local authorities.
The DWP added: "The benefits system supports millions of people who are on low incomes or unemployed and there is no robust evidence that welfare reforms are linked to increased use of food banks. Our reforms are fair and mean the welfare system will remain what it was always intended to be – a safety net for people at times of need."
Labour said the DWP's arguments that the government is not relying on food banks to fill a gap in the welfare system were unravelling. "Last year ministers said, 'food banks are absolutely not part of our welfare system', yet these official DWP documents show a system for referrals has been established," said Luciana Berger, shadow public health minister. "If ministers cannot answer the simplest of questions about their department, how can we have any confidence they will tackle the rising number of people who are having to access emergency food aid?
"As the queues at food banks grow with hundreds of thousands of people forced to use food banks to survive so too do the costs to our public health and wellbeing. Food banks have become a truly shameful symbol of Britain under this Tory-led government."
Esther McVey, the employment minister, had refused to release the guidance to Berger, saying: "It is not common practice in DWP to publish internal guidance."
Chris Mould, the executive chairman of the Trussell Trust, said despite the guidance, jobcentre practice on charity food support varied across the country.
A small number of jobcentres had good relationships with local food banks, some ignored food banks altogether and others referred claimants to food banks "indiscriminately and without thinking".
The Trussell Trust and the DWP agreed in 2011 after months of discussions that jobcentre staff should be able to send claimants to food banks. However, ministers continued to insist this only amounted to "signposting" in the right direction.
Last year, officials unilaterally changed the referral forms to remove the reasons why someone may have been sent to a food bank. Critics said this move made it harder for food bank staff to identify whether clients had been referred as a consequence of welfare reform.
Mould said: "The debate about whether food banks are part of the welfare state is a bit of a red herring. The real issue is about why people go hungry".

Stay on top of the latest policy announcements, legislation and keep ahead of current thinking.
Sign up for the Society briefing email
Follow Ray on twitter@Raywoolford
Posted by Ray Barron Woolford at 04:02