National Austerity March as 50.000 including People Before Profit March on Westminster. 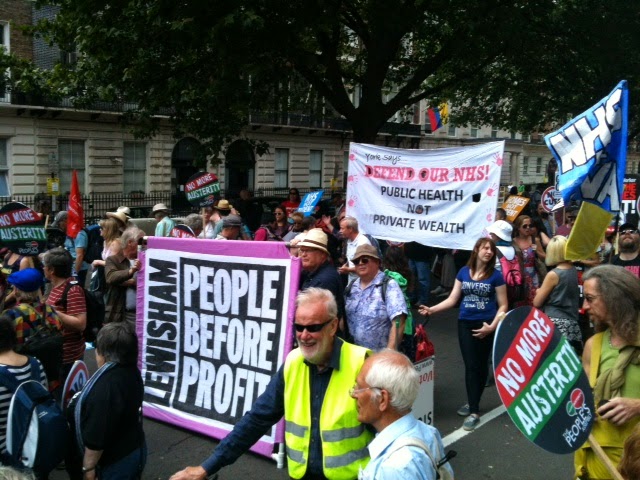 
Russell Brand has called on thousands of protesters to be part of a "peaceful, effortless, joyful revolution" that seizes power back from Westminster.
The former Big Brother's Big Mouth presenter, who this year implored readers of the New Statesman magazine to abandon the current political system, told crowds gathered in London's Parliament Square that MPs no longer represented the people.
Speaking in the shadow of the Houses of Parliament at the end of a march marking the one-year anniversary of the People's Assembly being formed, Brand stripped off his T-shirt and replaced it with one carrying the message "Firefighters rescue people not bankers".

Joyful Revolution: Brand Stripped Off His T-shirt During The Protest
He said: "The people of this building (the House of Commons) generally speaking do not represent us, they represent their friends in big business. It's time for us to take back our power.
"This will be a peaceful, effortless, joyful revolution and I'm very grateful to be involved in the People's Assembly."
An estimated 50,000 people took part in the march, which started at the BBC in Portland Place where protesters accused the broadcaster of ignoring the plight of impoverished Britons.
Brand, one of several speakers who also included comedian and commentator Mark Steel, MP Caroline Lucas and journalist Owen Jones, said: "I obviously face accusations of being part of the 1% (of the country's wealthy elite) myself but I wasn't designed in a laboratory with Jimmy Carr and Adele, I'm from Grays in Essex."
Referencing his previous drug addiction, of which he has spoken frequently, Brand joked: "I signed on for eight years, I lived on benefits. If it wasn't for that, I wouldn't have been able to work on my quite severe crack and heroin addiction.
"Where I grew up I felt there were low expectations."


In the run-up to the march, Brand talked of the "toxic swindle" of austerity.
He added today: "Power isn't there (in the House of Commons), it is here, within us.
"The revolution that's required isn't a revolution of radical ideas, but the implementation of ideas we already have."
Bowing to calls from members of the crowd to replace his T-shirt with the pro-firefighter garment, Brand replied: "See, I've given you even my vanity."
Brand has enjoyed an increased standing on social commentary in recent years, penning an article in the New Statesman two months ago entitled "We no longer have the luxury of tradition".
In it, he also called for a "total revolution", encouraging young people to abstain from voting, adding: "I will never vote and I don't think you should, either." It was a message he was to repeat on BBC Newsnight.
Sam Fairbairn, national secretary of the People's Assembly, said: "Make no mistake, these cuts are killing people and destroying cherished public services which have served generations.
"Alongside May Day demonstrations in memory of the legendary Bob Crow, who helped launch the People's Assembly, and Tony Benn, who was Assembly president when he died, we are now turning up the heat on Cameron and Clegg.
"Later this autumn, we will unite with the trade union and labour movement when it holds another monster march against austerity and the ConDems.
"Soon we will reach a size and influence where neither the BBC nor this austerity Government will be able to ignore us."
He said the group will aim to hold the biggest protest in British history later this year.

Posted by Ray Barron Woolford at 01:44