Ray woolfords Food Bank model with dignity and respect at its core. 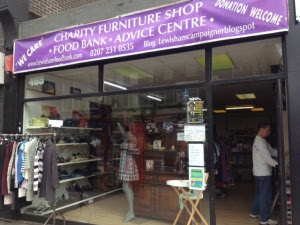 The People Before Profit shop: A food bank supporting other community initiatives
Today more evidence emerged about  the sheer numbers of people depending  on UK  food banks. But the most shocking fact is that the new figures published by the Trussell Trust – the biggest food bank charity – radically understate the true situation. The reality is that the charity only acounts for less than  half of the food banks in operation. So the figure of  more than 900,000 people given emergency food in the past year is actually much, much higher  than that.
But the evidence collected by the Trussell Trust exposed a 163 per cent hike in demand compared to 2012-13, and this rise has prompted a coalition of anti-poverty campaigners including the Trussell Trust  to claim that the UK  is breaching international law by violating the human right to food.
The Trussell Trust’s model involves individuals and organisations donating food that’s then redistributed free of charge to clients who’ve been given a foodbank voucher to use at a Trussell Trust food bank. The vouchers are issued by a jobcentre or a frontline care professional and those who get one can exchange it for three days’ emergency supply of non-perishable food. People can get a maximum of three consecutive vouchers. After that, the Trussell Trust says it signposts clients to organisations able to resolve underlying problems. But what really happens to improve the conditions of those who’ve had their three parcels of food? The food bank manager and the volunteers at the Trussell Trust food banks I know most about are highly committed and compassionate, but it seems to be getting harder to help those clients who repeatedly return. Take the case of Mark, who’s struggling with a shoulder injury, depression and debt. He’s been waiting months for his application for employment and support allowance (ESA) to come through, and has had to use the food bank many times. His life doesn’t seem to be getting better. Any prospect of significant improvement seems to rest solely within the power of the Department for Work and Pensions (DWP). Meanwhile, Mark continues to suffer.
The Trussell Trust is getting more involved in offering clients a degree of advocacy and support, but a few miles down the road in Deptford, South-East London, there’s a project that approaches soaring levels of food poverty in London in a different way – and actually offers advocacy for situations such as court hearings and aid to people in the form of loans.
The Lewisham and Greenwich People Before Profit shop charges £1 per individual or family for food. People must register, and there are 1,000 on their list. Client can choose 10 perishable and non-perishable items, including chicken or fish and vegetables (a number of potatoes would be one item). The shop also offers a second-hand clothes exchange, as well as selling some clothes and accessories and furniture. The staff there are paid a wage, and offer advocacy and support to the people who come here. For example, some of the people who visit get help when they have to attend industrial tribunals. On other occasions, staff have gone along to court hearings, and to meetings with social workers. This has included support for those who face having their children taken away because they can’t afford to feed them. Due to the withdrawal of legal aid, lawyers come in and give advice , as do benefits advice workers and a magistrate. 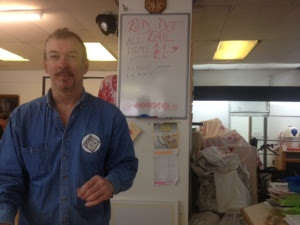 Lewisham and Greenwich People Before Profit campaigner Ray Woolford
Lewisham and Greenwich People Before Profit campaigner Ray Woolford says:  ‘These people give their advice for free, because they have a social conscience. It all helps to build a network of support. The food for the shop is sourced ‘all over the place, including from Fareshare, and from Waitrose in Greenwich, which allows us to have surplus food four nights a week. There’s not that much wastage these days though – the middle classes are being careful and the supermarkets are cutting back on their orders. The proceeds from the shop are used to buy the food staples. To those who say that poor people are fat, it’s important to remember that a loaf of bread full of additives is 47p, while a swede costs £3. Cheap food makes us fat.’
Ray Woolford thinks his is the only model ‘with the shop aspects and the food bank in one location’, and he believes it could be copied elsewhere. In addition, ‘we actually pay a decent amount of money to our staff and we produce money to help us run our project’. He says the main problems that bring people to the shop are ‘benefit sanctions, low incomes and high rents’. As well as going towards wages, the funds raised also get used in the form of loans to help clients get back into work. It’s not given as money, but would for example go on an Oyster card to cover someone’s first few weeks of travel costs to get to a new job. The project recently paid for one food bank user to obtain a fitness instruction licence and get back into work. Often the shop will pay for a £5 top-up to an emergency power meter for an elderly or otherwise vulnerable person. ‘No interest is ever charged, and people do generally give it back. We don’t give money directly to people, but this approach reflects that some people have exceptionally adverse circumstances.’
The funds raised through the shop have also been used to pay for the initial £900 registration of a not-for-profit green energy co-op, that fits in with the People Before Profit agendas for both green energy and improving the local economy.
People Before Profit is building a profile for itself in this area, and plans to put forward candidates in the elections to Lewisham Council on 22 May. It will also field a Mayoral candidate, though its manifesto says that if elected, he would only accept the average wage for Lewisham of £30,000 and stand down after four years. The manifesto flags up that Lewisham is the 16th most deprived in England out of 326 (2010 figures), with a youth unemployment figure of 36%. The main manifesto policies include keeping money in the area, helping locally based businesses, paying a living wage to all council employees, ending all contracting-out of council services to the private sector and abolishing the position of Lewisham’s ‘all-powerful’ executive mayor.
The approach here seems to be one of empowering people in food poverty to tackle some of the underlying issues that have led them to the food bank. The atmosphere is anything but dismal. ‘It’s not a miserable place. It’s full of life and vitality. It’s inspirational in many ways. Most of the staff stay here all the time. They don’t want to go home!’ Ray Woolford adds: ‘It’s not just about feeding people. It’s about getting people out of poverty and empowering them in some way. We’re trying to end dependency, not create it.’ Could Ray’s place inspire new ways to put citizens in charge of their own futures?
About these ads
Posted by Ray Barron Woolford at 05:06