Voting why you should be bothered.

Democracy puts strength in the hands of the many. Why in democratic Britain are the 90% treated like cattle for milking and for eating?

“Earth provides enough to satisfy every man's needs, but not every man's greed.”
― Mahatma Gandhi

Generally speaking our posts at Ripped-Off Britons are about who not to trust and why. For a change, in this post we do not write about untrustworthy people who gain our trust using flim-flam and deception – i.e. the usual roster of bankers, energy executives, politicians etc. For this post we write about the trustworthy people we have been persuaded by flim-flam and deception not to trust – all the ordinary people.

It isn’t enough for dodgy people to fool us into trusting them. For the dodgy to succeed it is necessary for us to mistrust their victims. It is necessary for us to doubt those in poverty (because they don’t work hard enough), those freezing in the cold (because they wilfully don’t put on an extra jumper), the unemployed (because they are lazy), the disabled (they secretly tango when no-one is looking) etc. The dodgy need us to mistrust their victims, because the victims are the witnesses and the evidence of their dodginess.
Doubtless some of these people are victims of their own foolishness. However it is very often true that the foolish make up a small minority of the victims. Consider the 2010 General Election. The Conservative party took 36.1% of the vote, and the turnout was 65.1% of the electorate: therefore the Conservatives won 36.1% x 65.1% = 24% of the country’s votes (less than a quarter). A figure that is at least better than the 2005 General Election, which the Labour Party won with just 22% of the electorate (Labour took 35.2% of votes cast, and just 61.4% of the electorate bothered to vote: 35.2% x 61.4% = 22%). 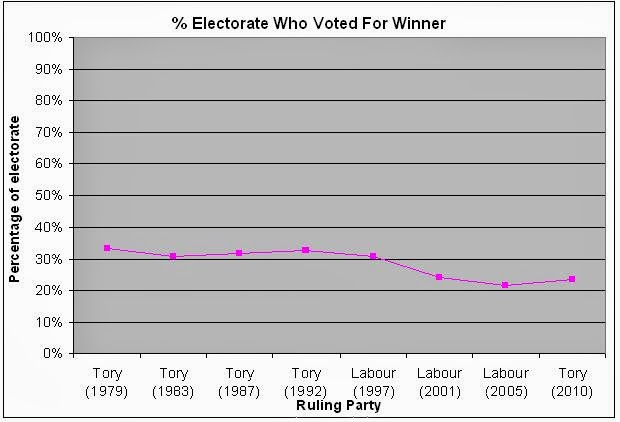 Some graphs from the think-tank Demos provide a good example of how we have been persuaded to mistrust ordinary people. Their report, “Generation Strains”, provides graphs showing attitudes of people split by generation:

The graph shows that on balance the public believe that most people on unemployment benefit (the dole) are fiddling in one way or another. (The graph's percentage figure = those who agree - those who disagree. So 0% means an equal number agree as disagree) 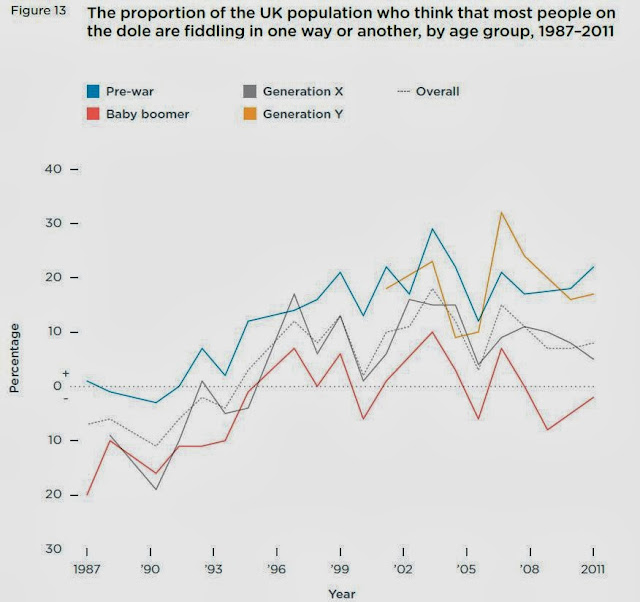 The Demos report comments that this belief seems based on a massive misunderstanding of basic facts:

Misinformation was rife, even among those who had significant experience of the benefit system. Across the generations, people not only tended to overstate the value of benefits to individuals, but also the proportion of the social security budget going to people out of work…. the tendency to overstate JSA (Job Seeker’s Allowance) spending spanned generations, reflecting research findings that three in ten (29 per cent) believe the government spends more on JSA than on pensions. In fact, the reverse is true by a factor of 15 (£4.9 billion is spent per annum on JSA, compared with £74.2 billion on pensions).
When we asked participants in the depth interviews to estimate the level of fraud in the welfare system, people typically estimated that around one-third of all welfare spending is made on fraudulent claims. This contrasts with official estimates of benefit fraud which stand at 0.7 per cent of total benefit expenditure, or £1.2 billion.
In one recent poll, the public estimated that on average 25 in every 100 claimants ‘deliberately deceive the government, as they would not be entitled to benefits if they told the truth’

A recent study of newspaper articles over a 16-year period found that 30 per cent of all articles on the subject of welfare referred to fraud. The study also looked into the origin of these stories, finding that the vast majority came from the policy process, encompassing government announcements, debates in parliament and reports by pressure groups. Of those stories covering a particular statistic, 80 per cent were sourced to central government, opposition parties, pressure groups or parliamentary committees, rather than the Office for National Statistics.

The Office for National Statistics is considered a reliable source. The others are not, but they make for better news stories.

But here is another surprise for those who would blame the newspapers. The Demos report shows that in the case of benefits there is very little correlation between the number of newspaper stories and the public’s negative attitude. Public distrust grew even when the papers lost interest in running stories on benefits fraud. 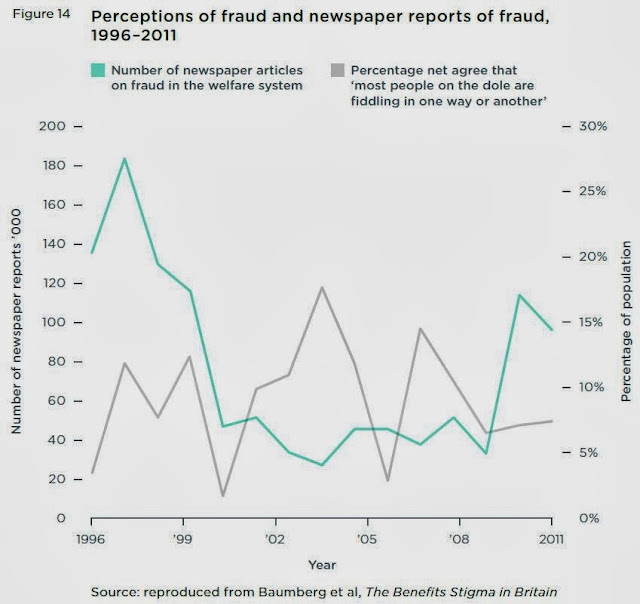 Whatever the reason for the mistrust, the mistrust is one of the central reasons why the 90% are herded around by the 1% like farm animals. This is not about Socialism and Capitalism. The Socialist/Capitalist argument diverts ordinary Britons from a couple of basic truths:

1) The spoils go to the strong.

2) In a democracy the many are stronger than the few.

The many are stronger than the few until the many are divided. Ordinary Britons have been subtly divided by mistrust of ordinary Britons. Not divided enough for us to turn against each other. But enough not to stand up to the small minorities in government and in the industries who rip us off on a grand scale.

Neither group is "better" than the other. But for there to be equity, these two strong groups need to pull for their own sides.

For decades of Labour and Conservative governments the bottom 90% of Britons have been failed. Rather than being a force to negotiate on equal terms with the powerful few, our governments have fallen in behind the powerful few in the hope of treats and rewards. But politicians love power even more than they love treats and rewards. Once they have exhausted all the alternatives, even politicians will do the right thing. It is up to us to demonstrate that the alternatives - all the misinformation and dissembling - are exhausted. 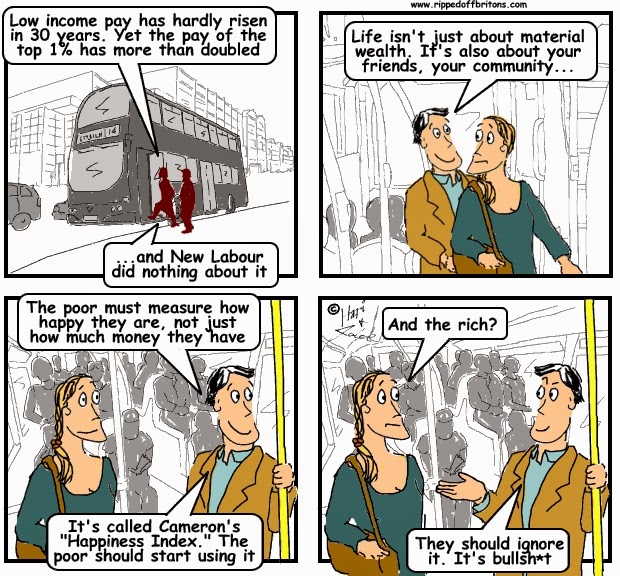 2014 is the last full year before the next General Election. This is a time to make all political parties know they need to represent the interests of those who vote them into power. They must do more than rip the votes out of us.
Posted by Jake at 13:48

Posted by Ray Barron Woolford at 02:10