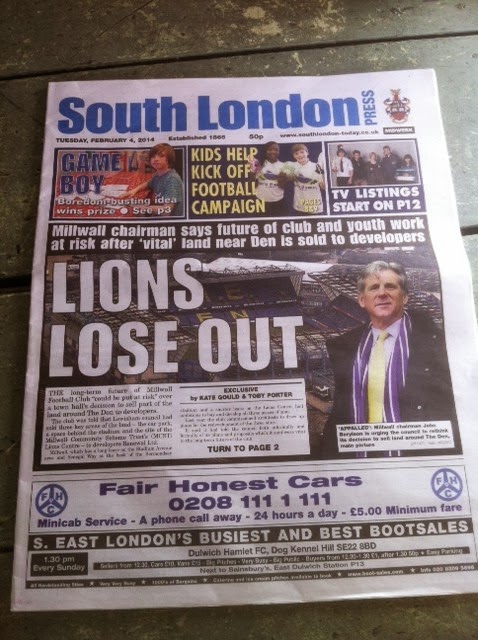 Yet again Labour Lewisham is putting the interest of developers ahead of the community in an abuse of power that would shame a dictatorship. Labour Lewisham seems to forget it has been elected by the residents of the borough to represent community interest not big business interest which is clearly going on, the way in which developments have sprung up across the borough has alarmed many and most seem to have almost 0 community consultation and even then concerns are ignored by Labour.
Just weeks ago Lewisham had the decision concerning Convoys wharf called in by Mayor Johnson so you would think Lewisham would take more care, but clearly they are so confident voters will re elect them in Mays local elections, they simply no longer give a toss what is in the interest of Community.
Millwall is a National treasure its importance to the local economy, heritage and pride is something that needs developing not cutting back on. The way in which this shoddy little deal with land owned by local residents has been sold of on the quiet to yet another developer shames us all, and i am working with fellow People Before Profit members to fight this scandle. Why was this deal done without any consultation with Millwall? Why was this deal done on the quiet will no public consultation? the more you look at this the more angry you became. Today i asked Joe Dromey New Cross Ward Labour Candidate and son of Labour deputy Leader  of the Labour  party Harriet Haman and Jack Dromey MP as to who he supports, Millwall or Lewisham Labours Developers? Needless to say i will not be holding my breath,
We have writtern to all media on this and will shortly launch an online petition.
We will also seek if need be an investigation by the Ombudsman, we strongly feel that this matter has not been carried out in a full legitimate and open manner and therefore must be declared unlawful.
Millwall Foot Ball club was a key supporter of Lewisham Hospital, long before the Labour Party Hijacked Save our Hospital for its own political agenda. We must all Stop this abuse, vote www.peoplebeforeprofit.org.uk in May and offer to help with yet another campaign.
Follow me on twitter@Raywoolford
We will be at Millwall Football Ground Saturday handing out Flyers.. Please email or tweet me if you can help us. Raymondwoolford@aol.com
Posted by Ray Barron Woolford at 07:31