Convoys wharf the finale verdict ; Boris gets his Ship, residents get 13 years of misery and poor health to look forward to.

SHARE THIS
TAGS
Boris JohnsonConvoys WharfDeptfordHutchison WhampoaLewisham CouncilMayor Of LewishamMayor Of LondonSir Steve BullockTerry Farrell
“If we get it wrong now, we won’t have the opportunity again in our lifetime”.
The words of Sir Steve Bullock, Mayor of Lewisham, before he urged Boris “to take just a little more time to ensure that these issues can be addressed and resolved satisfactorily”.

Mayor of London, Boris Johnson, speaking at the end of the Convoys Wharf representation hearing
But after “a marathon session” on Monday evening, 1 March 2014, which Boris Johnson, Mayor of London also found to be “very, very interesting and educational”; he made the decision to approve the Convoys Wharf outline planning application subject to two additional conditions.
As in his conclusion, Boris Johnson said
“I am minded therefore to give consent, subject however to agreement of the 106 which must contain two provisions. I’ve been very impressed tonight by the arguments that have been made by the MP Dame Joan and by others who have made a strong case in favour of two schemes that seem to me who have a great deal of merit and are both intrinsically attractive, the idea of the Sayes Court Gardens horticultural venture and The Lenox Project.
“And so with two provisions that must be in the 106 are: that my officials should get together with Lewisham and the developers and to look at this space in Sayes Court Gardens and indeed around the development in general that has been identified to come up with a secure, viable and deliverable project. That’s the first provision. I’ve mentioned SCG haven’t I? I’ve mentioned the existing park …. to look  at the space in the existing park and the wider development to ensure that there is a viable and deliverable project.
“Second condition. I’m delighted that the developers, whom I warmly congratulate on their scheme by the way, I’m delighted that they have agreed to fund a feasibility study into the Lenox project and I would like that one of the provisions that we will include in the 106 is that this feasibility study should be concluded as soon as possible to produce clear options and that there should be an agreement on the part of the developer to contribute to whichever of these options is the most feasible. And with those two provisions in my 106, I therefore give consent to this proposal.”

The hearing which had almost all the speakers present opposing the current development proposals, still turned out to be a victory for Hutchison Whampoa and their Architect Terry Farrell. As the Mayor of London did what the officers of the Greater London Authority had recommended he should do in their report prior to the hearing.
Personally while I welcome the development of the site, I can’t help but feel that it could easily become a rich ghetto, with little or no connection to the rest of Deptford just like Aragon Tower of BBC One documentary, The Tower: A Tale of Two Cities fame.
Also with the ideas the developers have for the Olympia Building – shops and such as well as the linear park on the jetty; it could easily become inward looking as the new residents use the facilities provided within the complex; venturing into Deptford High Street only when they need the train.
And one other thing that bothers me is, with numerous new developments that would feed into the A200. The busy and many times jam-packed stretch of road that starts from London Bridge via Tooley Street, through Jamaica Road, down Lower Road into Evelyn Street ending with Creek Road.
Though it is true that limited parking spaces are being provided for all these new builds, it is not necessarily true that those moving in will not buy cars. Hence exacerbating the traffic situation faced by those who use or live close to this arterial route. A problem highlighted by the Mayor of Lewisham and Helena Russell, a local resident.
for more on this, Deptford Is… has a detailed breakdown/analysis of the proceedings, which you can find here.
www.peoplebeforeprofit.org.uk will be putting forward candidates in all wards in Mays local elections. Deptford and New Cross are target seats in which PB4P have a record of coming second so should win come May

Ray can be followed on twitter@Raywoolford 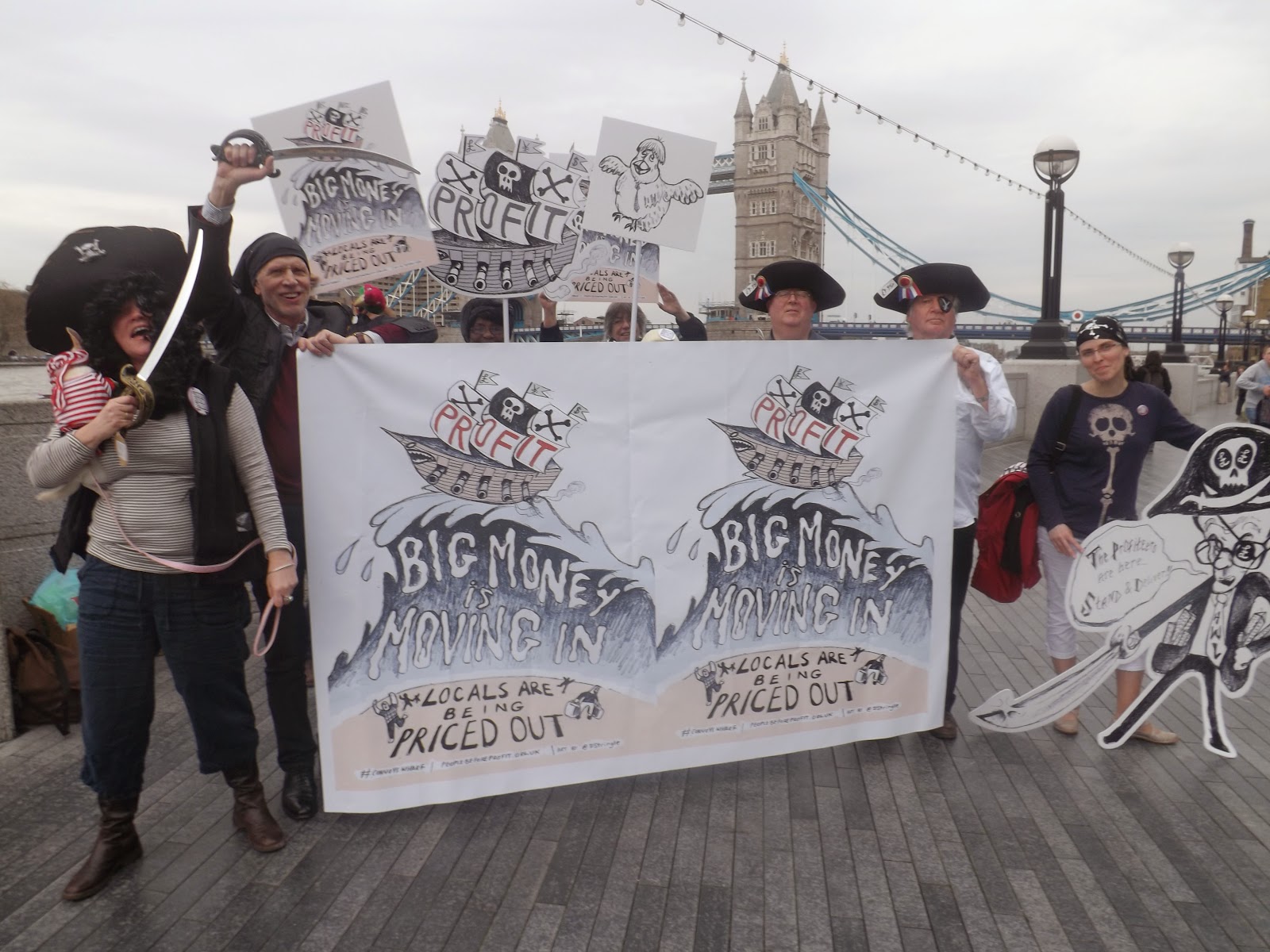 Lewisham People Before Profit as always standing up for Deptford outside the GLA hearing Monday 31 March.


You can watch the webcast of the hearing on the GLA website here (Mac users will have to download a QuickTime add-on). But be warned it is about 3 hours long!!!
Links:
http://www.deptfordis.org.uk/2014/04/mayor-passes-application-with-conditions.html
Posted by Ray Barron Woolford at 01:15