Convoys Wharf redevelopment to go ahead 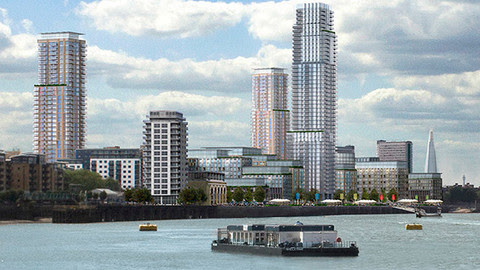 Convoys Wharf proposal Pic: Hutchinson Whampoa
Mayor Boris Johnson has approved the £1bn redevelopment of Convoys Wharf, on the condition that Hong Kong-owned developers Hutchison Whampoa revised their plan in order to incorporate local community projects.
The redevelopment will now include the restoration of Sayes Court garden, the site of horticulturalist John Evelyn’s garden and birthplace of the National Trust; and a plan to build areplica of the 17th century warship Lenox.
Speaking last night at the development hearing at City Hall, the Mayor described the two local projects as: “strong schemes with great merit”.
His officials are set to meet with the developers and Lewisham MPs to ensure that they can deliver a: “secure and deliverable project”.
Graham Clements, developments and projects for the Greater London Authority, said: “We are satisfied that the development will enhance the setting and not adversely impact on the world heritage site.”
The redevelopment will see the Deptford dockyard transformed into a 41-acre riverside site with 3,500 homes, 500 of which will be classified as affordable, office space, retail outlets and recreational grounds.
Local residents, MPs and directors of the two community projects “Build the Lennox” and ‘“Sayes Court” were then given 18 minutes to collectively state their case against the developments before the Mayor gave his verdict.
Locals drew attention to the height of the proposed buildings which could potentially obscure the historic Olympia building, as well as an increase in congestion and pollution levels.
The developers insisted that their original master plan: “Balanced the needs of the development itself and the community aspirations”, and that, “Changing the master plan is not as easy as it has been suggested.”
The reactions to the final outcome were mixed. Some were relieved that community projects will become an integral part of the redevelopment, whilst others believed that issues of housing, transport and building heights had not been effectively addressed.
Cheryl Coyne from Lewisham’s People Before Profit said: “They are building flats for multimillionaires but there are 18,000 homeless in Lewisham.”
Coyne’s colleague Ray Walford, described Convoys Wharf as: “A land grab and a rush for profit.”
Sir Steve Bullock, Lewisham’s Mayor, also expressed his concern on: “The great need for affordable housing” having previously urged the Mayor to take more time over the decision.
The redevelopment is proposed to begin this year and be completed in 2023.
By Jacqueline Agate

Posted by Ray Barron Woolford at 03:12